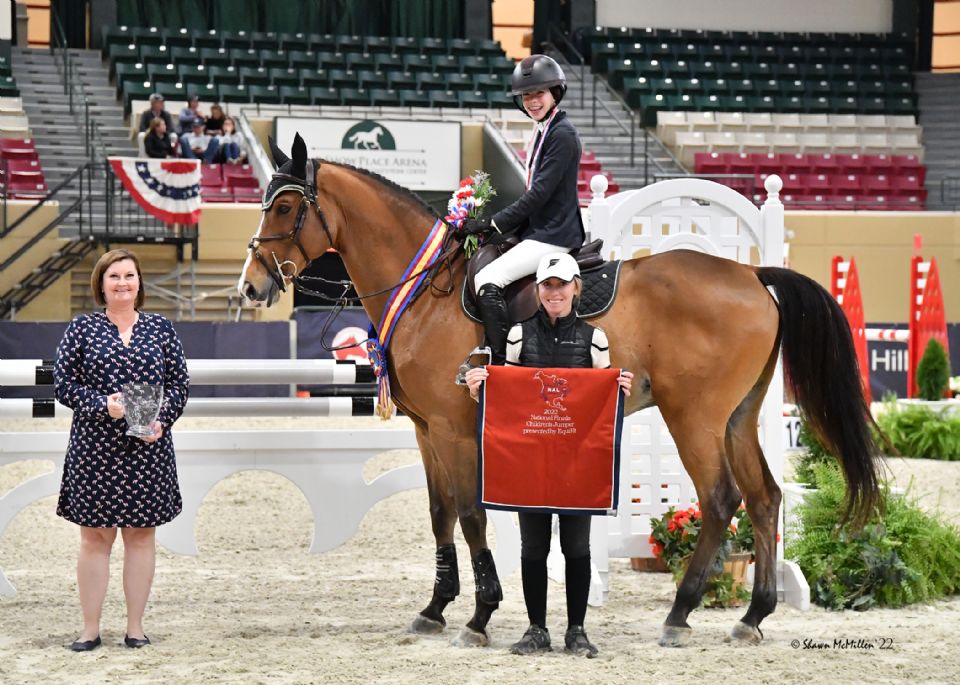 Emma Brody and Nicarmargue are joined in their winning presentation by Annette Longenecker representing the NAL and trainer Eleanor Kunsman.
Photo by Shawn McMillen Photography 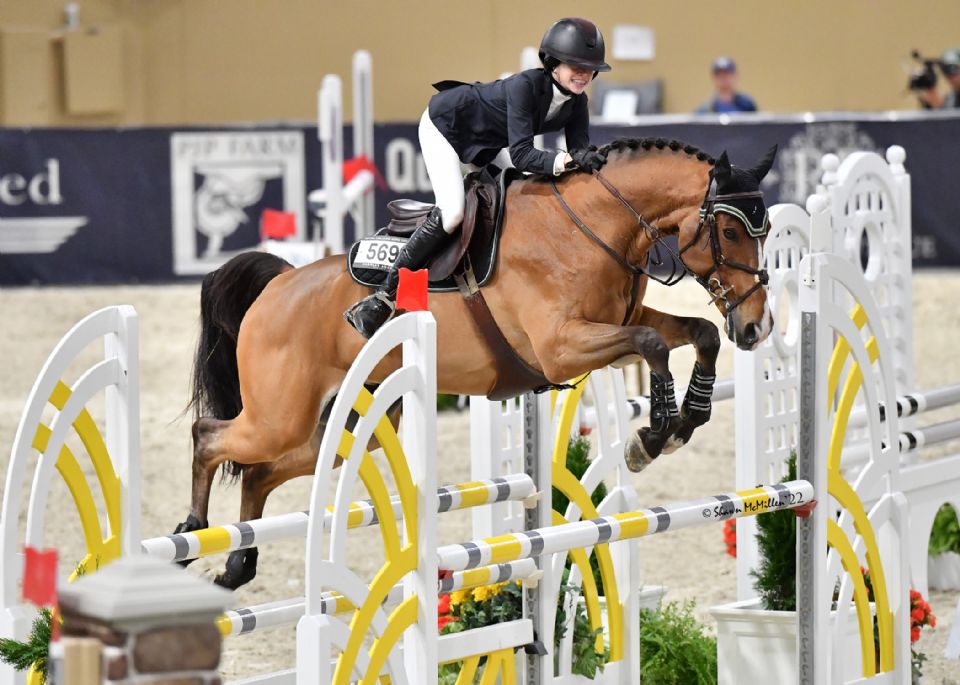 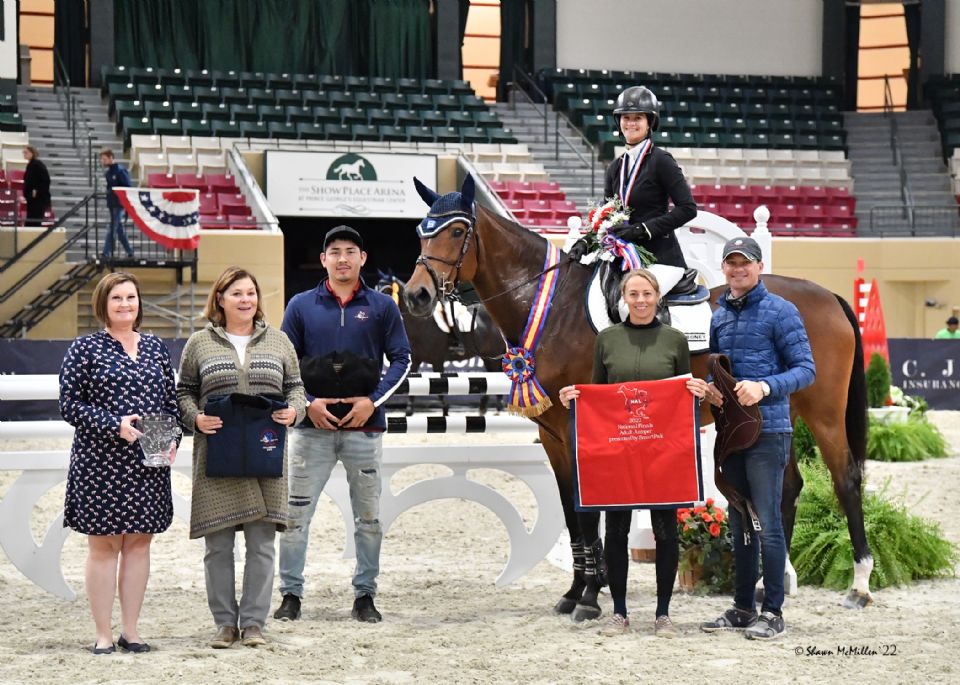 Lindsey Tomeu and Gold Lux in their winning presentation for the $10,000 NAL Adult Jumper Final, presented by Smartpak.
Photo by Shawn McMillen Photography 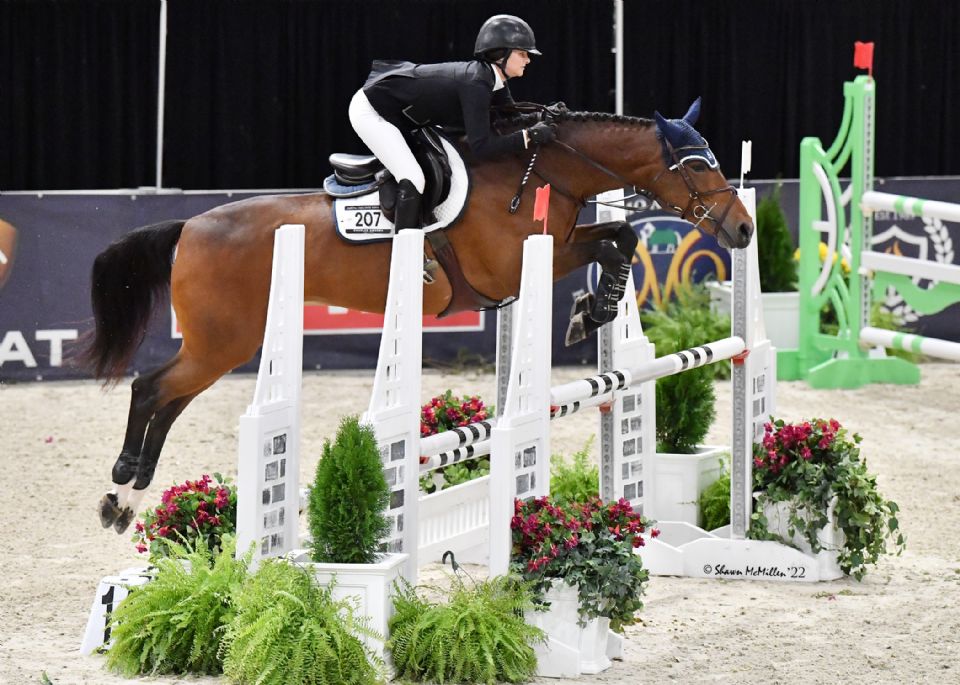 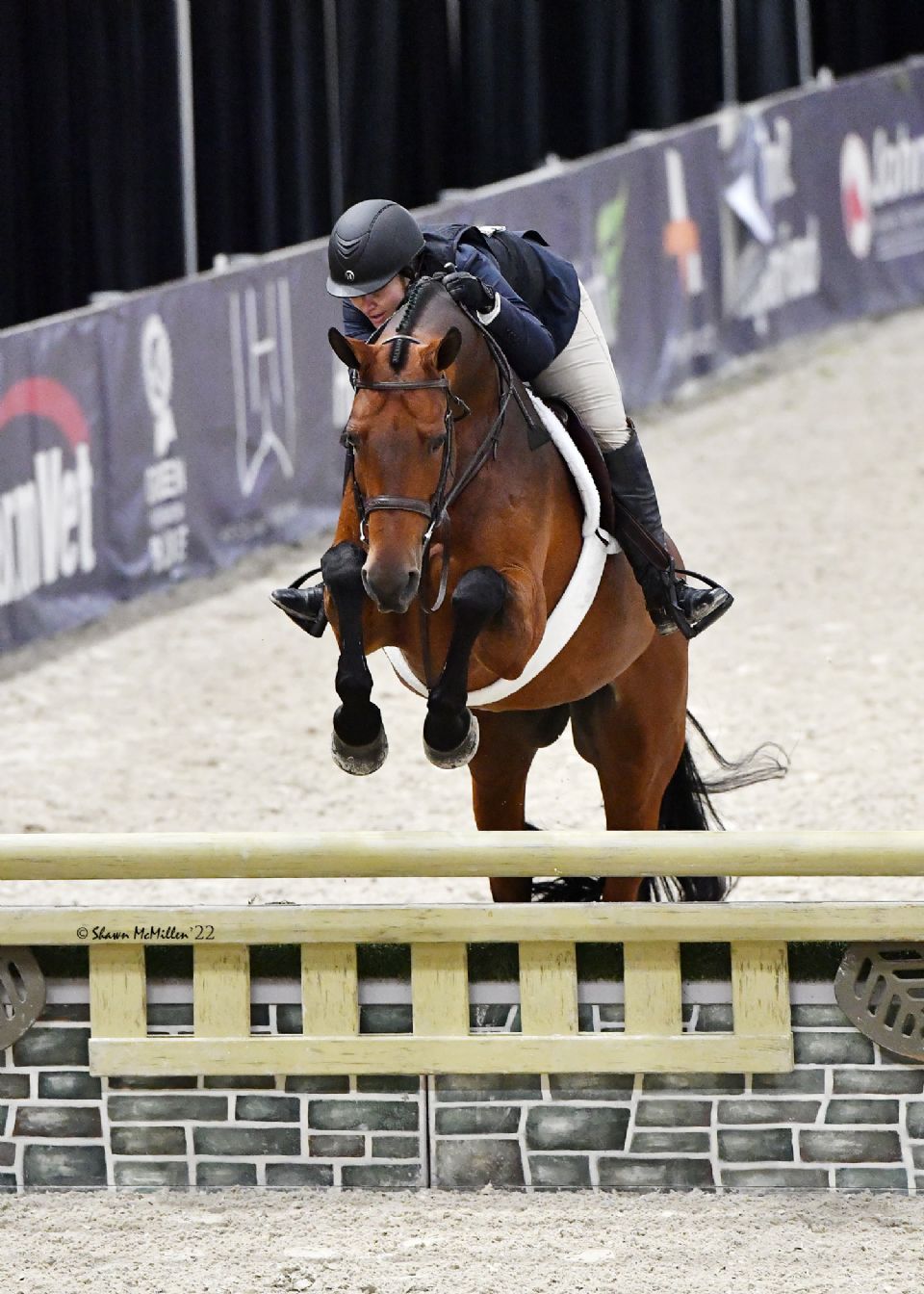 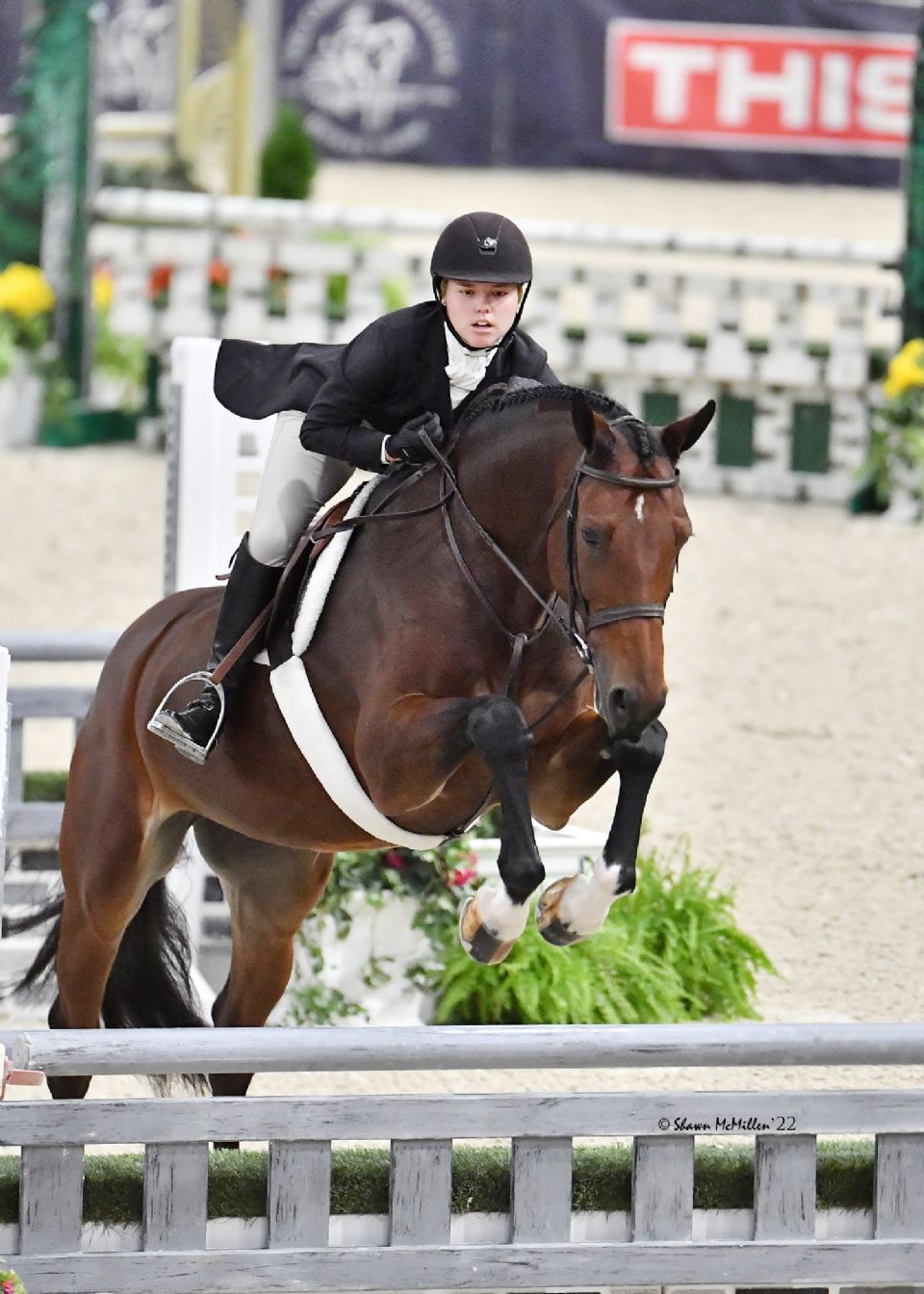 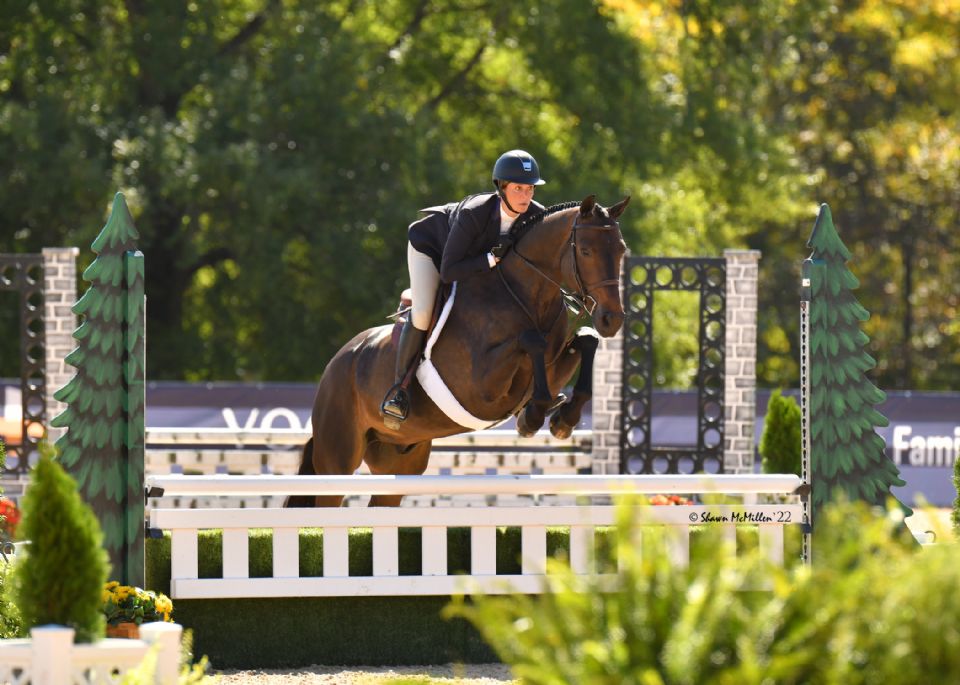 The 2022 Capital Challenge Horse Show, held at Prince George’s Equestrian Center in Upper Marlboro, Maryland, got everyone’s adrenaline pumping on Thursday, October 6, as riders raced over the course for wins in the North American League (NAL) Jumper Finals, and two champions were crowned.

In the $10,000 NAL Children’s Jumper Final, presented by EquiFit, Emma Brody of New York, New York, turned and burned with Nicarmargue to claim the top prize in 26.254 seconds. Lindsey Tomeu of Wellington, Florida, and her longtime partner, Gold Lux, ran away with the win in the $10,000 NAL Adult Amateur Jumper Final, presented by SmartPak, in 25.995 seconds.

Child riders were the first to tack to the course, with 29 riders contesting the first-round track designed by Ken Krome. Fifteen found the clear path to advance to the jump off, where Brody was ultimately victorious. Close behind them was second-place winner Maya Rahaim of Grosse Pointe, Michigan, who rode Renaud Farm LLC’s Whiskey Business across the timers in 26.519 seconds. Capri Truesdale of Greenwich, Connecticut, and her own Remmits Delphi rounded out the top three, stopping the clock in 27.366 seconds.

“I was a little nervous in the first round, but I always get more excited in the jump offs because that’s what I’m best at,” relayed Brody. “The jump-off course was good. My horse is quick, big-strided, and he can turn easily. He doesn’t care about any mistake you make, so he’ll do any course perfectly.”

Brody, who trains with Eleanor Kunsman at Glen Eden in Chester, New Jersey, has been paired with the 14-year-old Danish Warmblood gelding (Carmargue x Leendert) for two years. As the rider’s first jumper horse, Nicarmargue has been charged with taking Brody through the year’s indoor finals.

“I’m so grateful for such an amazing horse,” expressed Brody. “He’s so good in the barn. He’s a little quirky, but he’s always been like that. My mom gets to ride him too, which is nice.”

In her victory, Brody was appreciative of the moment and the supportive people around her.

“I’m so excited to win at Capital Challenge,” she said. “We’ve been working for this all year, and I’m thankful for my whole team that got me here. I love being in indoors. I feel like ‘rising to the challenge’ is always so fun, and just being able to ride at such an amazing event is special enough.”

Click here for the full results of the NAL Children’s Jumper Final, presented by Equifit

Of the 23 horse-and-rider combinations in the NAL Adult Jumper Final, presented by SmartPak, Lindsey Tomeu put the pedal to the metal for the fastest time of the night of 25.995 seconds aboard Gold Lux.

Tomeu had two rides in the class, first piloting Just Noble, owned by Sweet Oak Farm, to a clear first round, and then replicating the result with her own “Goldie.”

“Of course, being an amateur, I was a little nervous about the triple-bar,” laughed Tomeu of the first-round course. “I left a little long on my first horse, [Just Noble,] and with Goldie I just knew that if I rode out of the turn and sat up, she got me straight to the base and had no problem. Everything else, I never worry about her ever. It’s only me. I worry about myself, but her, she’s a gem.”

In the jump off, Tomeu returned first with Just Noble and posted a time of 26.877 seconds, eventually finishing in fourth. With Goldie, they were the penultimate duo, so Tomeu knew what she had to do for the victory.

“I was trying to not leave anything on the table and just run,” explained Tomeu, who has trained with the team at Sweet Oak Farm for more than a decade and considers them family. “I knew Goldie would take care of me, and if a mistake happened it happened. I can usually trust her to pull through, especially in big venues like this.”

Goldie, a 16-year-old Irish Sport Horse mare by Lux Z, has been with Tomeu for many years, and Tomeu regards their partnership to be extremely special.

“I get goosebumps,” said Tomeu of her relationship with Goldie. “We call her the queen and an angel. She is the safest animal. A lot of people have learned how to do the jumpers on her. I leased her out in the barn while I continued to show my other horse, and now it’s finally her time to be mine and shine. She’s just the best animal on the planet. You literally trust her with your life.”

In their enduring partnership, Tomeu and Goldie have picked up numerous wins at major venues up and down the east coast. Now they can add Capital Challenge NAL Jumper Final Champion to the list.

“Capital Challenge is great because it’s the start of the indoor season, and everything from the ribbons to the presentations are amazing,” commented Tomeu. “They really put an effort in to make it special.”

Alexis Mierzwa of Winchester, Virginia, piloted her Glynnwood Mer Calido to a second-place finish in 26.299 seconds. Alyson Gurney of Washington D.C., came in third with her own Black Friday in a time of 26.690 seconds.

Click here for the full results of the NAL Adult Jumper Championship, presented by SmartPak

As they cantered their first course together this week, Martha Ingram of Nashville, Tennessee, knew that she could depend on Romeo. The pair swept the blue ribbons in the three over fences classes and added another third place under saddle to win the Amateur-Owner Hunter 18-35 3’6” division championship, sponsored by The Hallman Family & MerryLegs South LLC, as well as the Grand Champion Amateur-Owner 3’6” Hunter honors, sponsored by Finally Farm.

They were presented with the Dr. Harold M.S. Smith Trophy, donated by Dr. Suzanne Smith & Dr. Peter Craig. The reserve championship in the Amateur-Owner Hunter 18-35 3’6” division went to Casanova Royal and Stephanie Danhakl. Ingram was named the Best Amateur-Owner 3’6” Rider, sponsored by Mr. & Mrs. Ernest M. Oare and awarded The So Many Ways Challenge Trophy, donated by Karen Kramer.

“Until yesterday I had never jumped a line or a course on him,” related Ingram. “It was surprising, because I am quite a chicken. But Tom [Wright] just knew how special that horse was and knew that he was going to be amazing in there. He’s super brave, super attentive, and really my ride.”

Ingram picked up the ride on Romeo after her father, John Ingram, had an unfortunate recent fall and he is unable to ride. “I’m very grateful that he and my mom allowed me to show him here,” she expressed. “This is my first time doing the 3’6” at Capital Challenge, I believe, since I was a junior. This is one of my favorite horse shows. The best of the best come here. Everybody wants to do well here, and it’s not easy; that’s why it’s called Capital Challenge. Winning doesn’t ever get old. I just feel so honored and lucky.”

The Amateur-Owner Hunter 36 & Over 3’6” championship, sponsored by Mr. & Mrs. Ernest M. Oare, went to Wayland Square, ridden by Tara Dow-Rein and owned by Rein Family LLC. Irene Neuwirth and her own Guess Who finished as reserve champions.

A Feast of Awards for Bulger and Hemingway

Bulger has had Hemingway for seven years and watched him grow up. “Hemingway felt extraordinary today,” she said of the 12-year-old Hanoverian gelding. “He was really on his game. I felt him jumping so well. He’s a performer, and he loves to go in the indoor and really show off his scope and athleticism. I’m just glad I could stay calm, stay with him, and ride that extravagant jump.”

“He’s a dream,” said McDonell of Moore Park, an 11-year-old Warmblood gelding, owned by Rein Family LLC. “He’s like a rocking horse. You just have to get him within in range, and he tries his heart out.”

McDonell received a call from Mitchell, her friend of 20 years, that Moore Park needed a rider at Capital Challenge, and McDonell was able to make her first trip to the horse show.

“I don’t think it could have gone better,” said McDonell. “I think I just needed to keep all of Brady’s instructions in my head and execute the plan as instructed, and that’s what happened today. It was incredible to have the opportunity to come to such a fantastic national horse show here, and to come out on top and win all three was pretty amazing. It was absolutely a dream come true.”