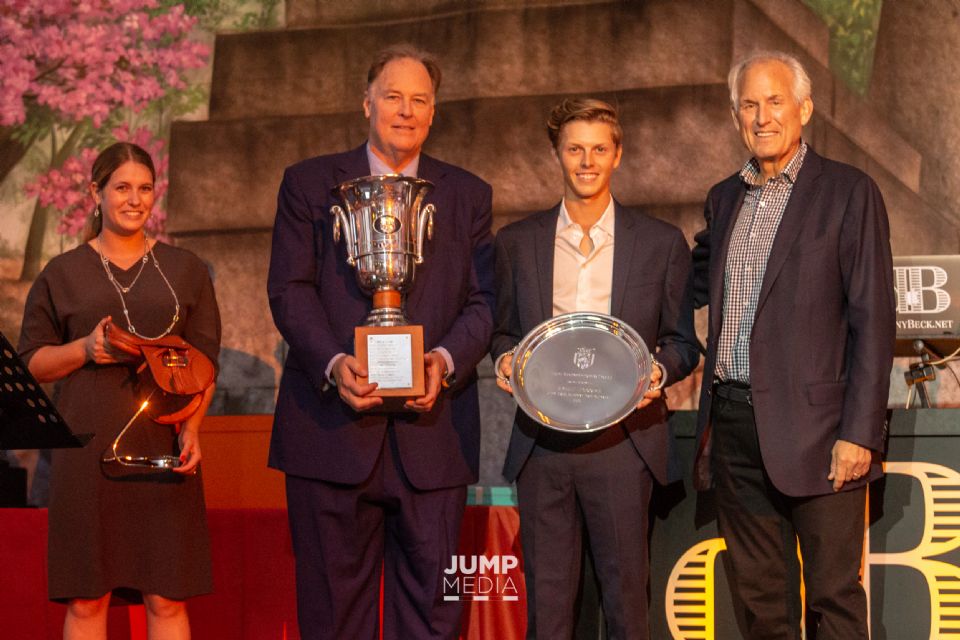 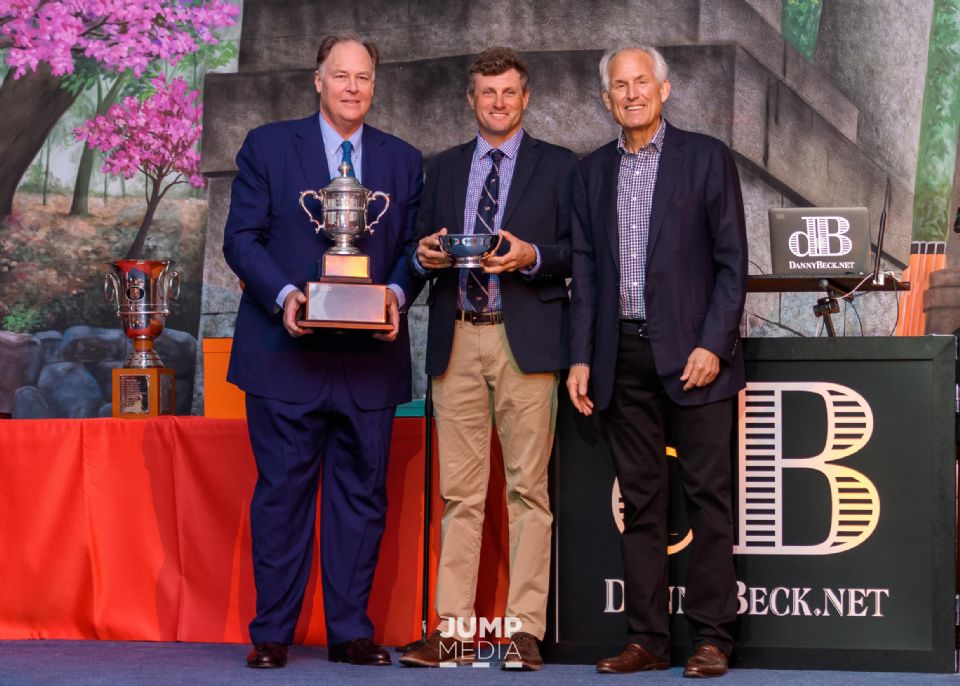 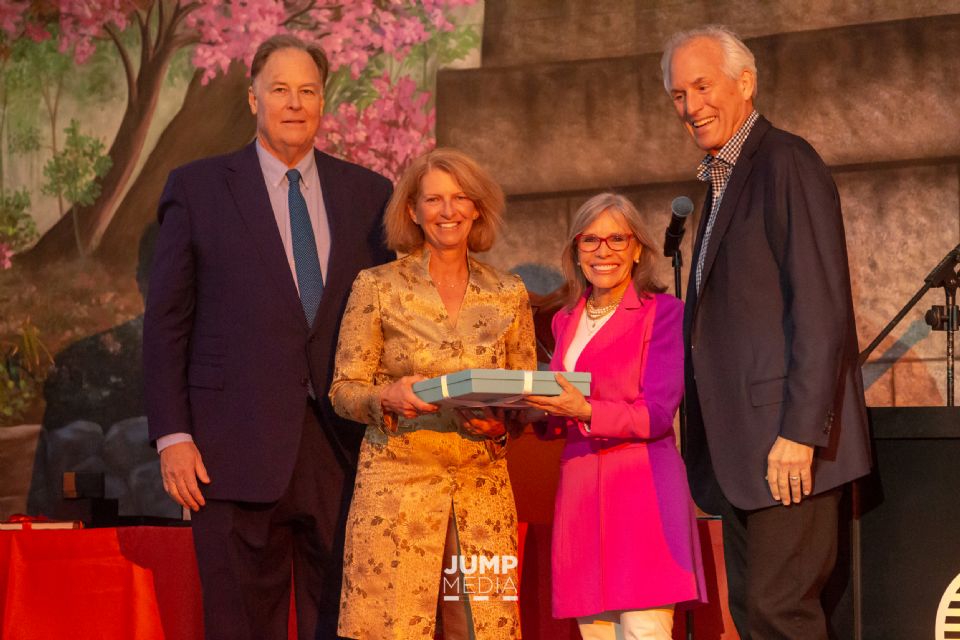 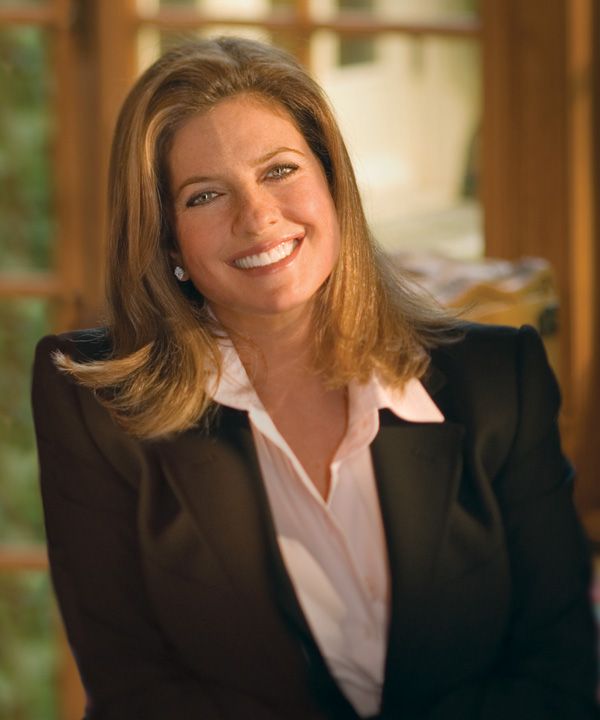 The United States Equestrian Team (USET) Foundation presented the organization’s three most prestigious awards to Brian Moggre, Boyd Martin, and Abigail Wexner on January 17 at the “Take Me To Tokyo” gala in Wellington, FL.

Brian Moggre, 19, of Flower Mound, TX, was awarded the 2020 Lionel Guerrand-Hermès Trophy, presented annually to a junior/young rider in one of the Olympic disciplines who demonstrates the team’s values of sportsmanship and horsemanship.

Riders who are awarded the Lionel Guerrand-Hermès Trophy are identified as athletes with great potential, and the list of winners who have received the award is a “who’s who” of the U.S. Equestrian Team in the Olympic disciplines – to which Moggre now adds his name.

“It takes a huge team to make all of this happen, and that’s really what I’m thankful for,” continued Moggre after having accepted the award. “I’m so thankful to Gianna Aycock, Mike McCormick, and Tracy Fenney and my current team of Emily Smith and Ken Smith as well as my parents and Lesley Leeman, who takes care of my horses. I’m very honored to now have my name on a trophy with the best riders in the entire world, and it means so much to me.”

Patrick Guerrand-Hermès established the Lionel Guerrand-Hermès Memorial Award in 1983 in memory of his son, Lionel, who was tragically killed in an automobile accident in 1981 at the age of 18. Lionel trained with the United States Equestrian Team and was talented enough to be considered an Olympic hopeful. Included on the list of past winners inscribed on the perpetual trophy are such notable names as Greg Best, Chris Kappler, McLain Ward, and Buck Davidson, among many others.

The 2020 Whitney Stone Cup was awarded to Olympic eventer Boyd Martin, identifying him as an active competitor who displays consistent excellence in international competition, as well as exemplifying high standards of sportsmanlike conduct, while serving as an ambassador for the United States and equestrian sport.

“It’s an absolute privilege and honor to receive the Whitney Stone Cup this year,” said Martin, who operates his training business, Windurra LLC, out of Cochranville, PA, alongside his wife Silva, a grand prix dressage rider. “Winning this award is one of my proudest achievements. To be recognized alongside some of the past winners is truly a humbling feeling. The USET Foundation has given me every chance and every opportunity to allow me to be the best I can be and to achieve all the success I had in 2019.”

Martin is one of today’s leading event riders, having enjoyed success at the highest level of the sport and every major eventing competition in the world. He has consistently been ranked top 10 in the world since leaving Australia in 2007 and has competed on every U.S. Championship team since changing his citizenship in 2010. Martin has represented the U.S. at two Olympic Games, three FEI World Equestrian Games, and two Pan American Games. He has twice been the highest-placed U.S. rider at the World Equestrian Games and led the U.S. to team gold at both Pan American Games appearances.

At the 2019 Land Rover Kentucky Three-Day Event, Martin finished second with Tsetserleg, owned by Christine Turner, to win the USEF CCI5*-L National Championship. This result landed Martin and Tsetserleg on the Pan American Games team for Lima, where the team had to win gold or silver to qualify the U.S. for the 2020 Tokyo Olympic Games. Martin delivered under pressure to win individual gold – the first individual medal of his career – and secure team gold and Tokyo qualification.

“I really feel like I’m starting to hit top gear coming into 2020, and I’m so proud to be an American, representing the stars and stripes,” said Martin. “I can’t wait to get out there and see what this year brings.”

with Jim McNerney and Jacqueline B. Mars, the Raising the Bar Campaign. As part of the campaign, Wexner has established the Wexner Olympic Endowment as a source of support for U.S. athletes and teams in Olympic years.

Wexner is a long-time horse owner and has been partnered with top jumper rider Beezie Madden for more than 15 years. Madden has ridden Wexner’s horses on numerous Nations Cup teams, along with the 2004, 2008, 2012, and 2016 Olympic Games and the 2006, 2010, and 2014 FEI World Equestrian Games. This partnership has produced for the United States two gold, three silver, and three bronze medals in Olympic and World Championships, two World Cup Finals victories, and been a part of 18 winning Nations Cup teams.

A true ambassador of the sport, Wexner’s distinguished service through excellence in leadership, philanthropy, and character has positively impacted the Foundation’s mission of supporting athletes, promoting international excellence, and building for the future.

The R. Bruce Duchossois Distinguished Trustee Award was established in 2015 in recognition and honor of Bruce Duchossois’s leadership, generosity, and outstanding character. Duchossois’s life was celebrated that year as the first recipient of the prestigious award, and now the legacy he created lives on in others through the award with the annual presentation to a USET Foundation Trustee who exemplifies the qualities he embodied.

The USET Foundation is a non-profit organization that supports the competition, training, coaching, travel, and educational needs of America's elite and developing international, high performance horses and athletes in partnership with the United States Equestrian Federation. To learn more and to support the Raising the Bar campaign, please visit www.uset.org.

Media interested in additional photos, quotes, and coverage from the Take Me To Tokyo gala, please contact Emily at emily@jumpmediallc.com.