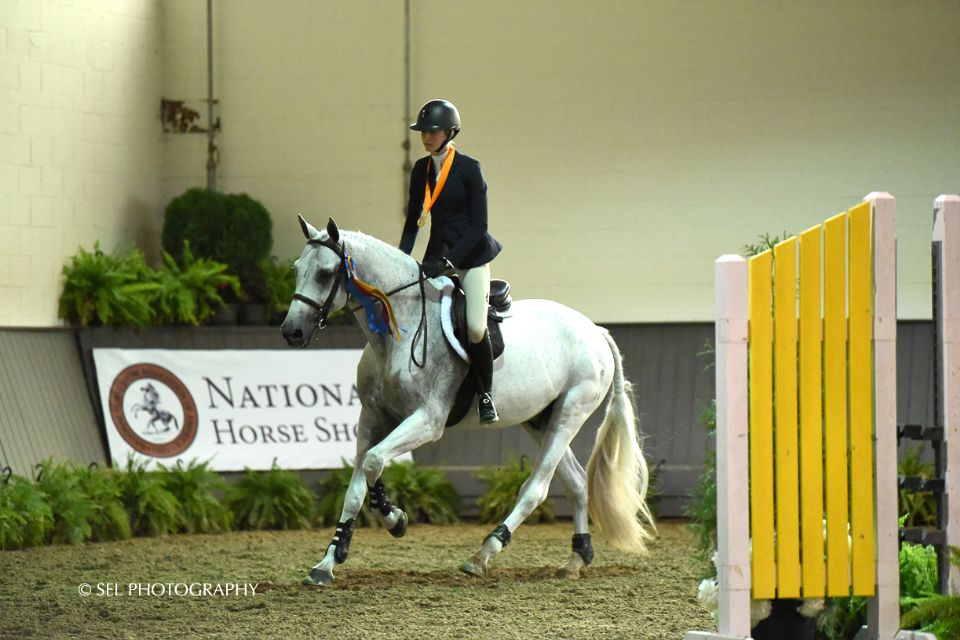 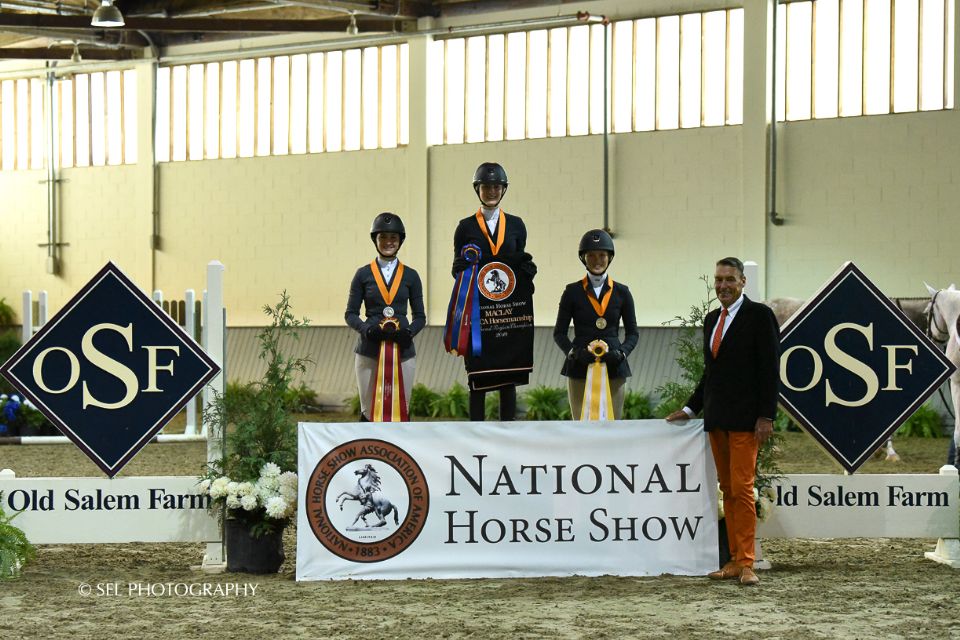 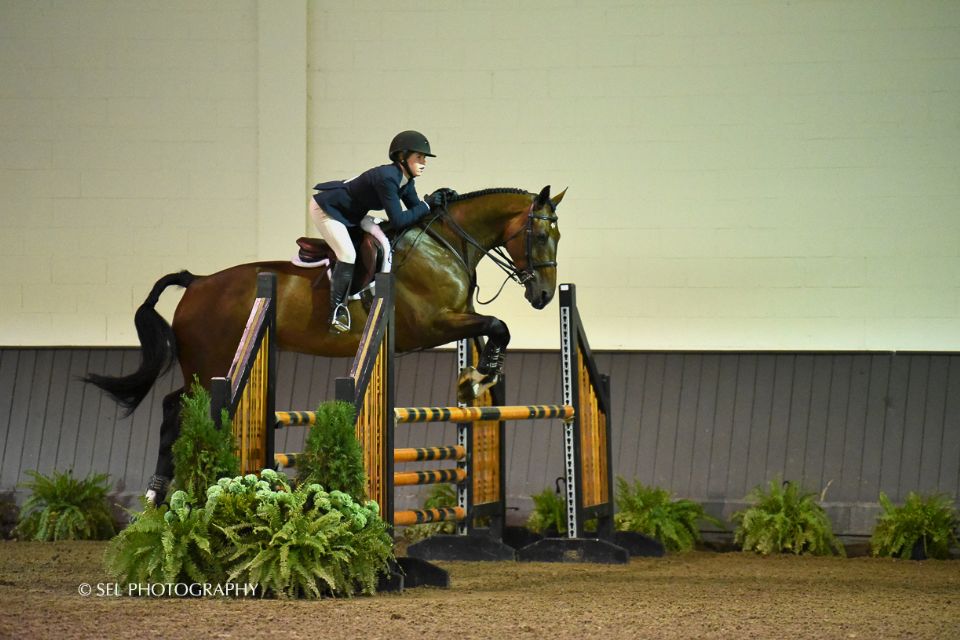 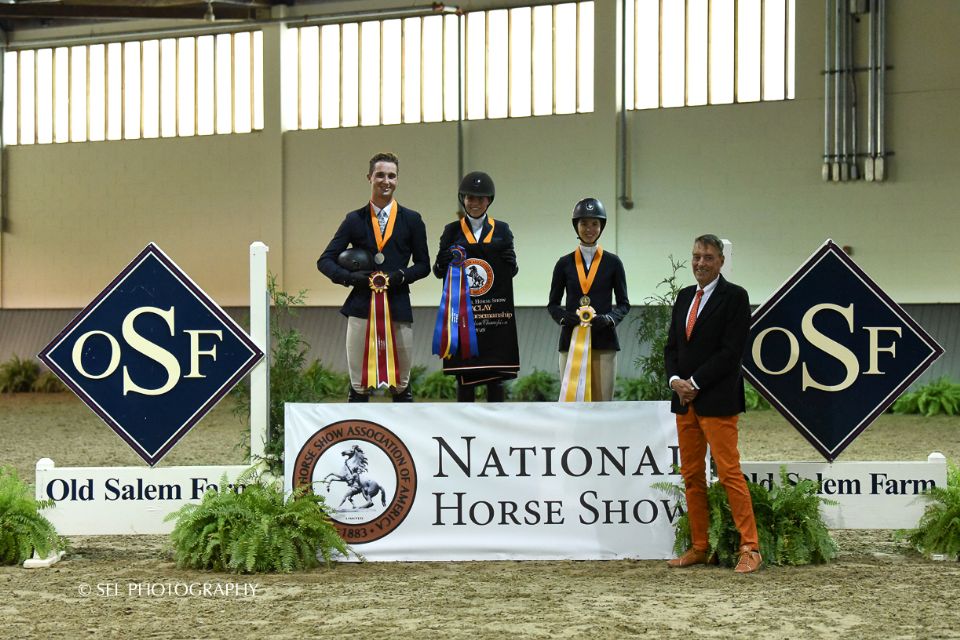 Winner Taylor Griffiths is joined on the podium by runner up Maverick Helmer and third-place finisher Abigail Lefkowitz after the Region 2 ASPCA/NHSAA Maclay Championships.
Photo by SEL Photography

Old Salem Farm in North Salem, NY, hosted the Region 1 and 2 ASPCA/NHSAA Maclay Championships on Saturday, September 22, with a Region 1 victory for Annabel Revers of Weston, MA, and a Region 2 win for Taylor Griffiths of Brewster, NY.

Elite equitation riders from both regions competed at Old Salem Farm with hopes to qualify for the coveted ASPCA Maclay Horsemanship Championship, held at the National Horse Show on October 27 through November 4 in Lexington, Kentucky. The Regional Maclay Championships included a jumping and flat phase in the indoor arena at Old Salem Farm, a venue that provides equitation riders an early opportunity for top-quality indoor competition before the commencement of the indoor finals each fall.

Revers, 18, rode Quax, owned by Beechwood Stables, LLC, to the Region 1 win under the direction of Max Amaya of Stonehenge Stables and Stacia Madden of Beacon Hill Show Stables, both based in Colts Neck, NJ. The 2018 season will mark her fourth time qualifying for the ASPCA Maclay Horsemanship Championship after scoring a fourth-place result in 2017.

“This is my last year to be able to compete, which is a little sad, but I have had Quax for four years, so he is really special to me and I am hoping to have one more good year and enjoy it,” said Revers, who is in the midst of a gap year from her studies to focus on riding before attending Dartmouth College in Hanover, NH, in the fall of 2019. “I’ve ridden more in the past month than I have in my entire life and I’m focused on these finals as a way to launch into more of a jumper focus.”

Of the 50 riders who competed in the regional championship, Revers bested the group with humility saying, “It’s nice to win, but the goal is to get to Maclay finals. This time it worked out and my horse really pulled through. My approach today was to not get anxious. Max told me right before I walked in the ring to just ride the course and not make it too complicated.

“I think being able to get back indoors in a similar atmosphere to the final is really nice opportunity,” continued Revers. “It provides a good transition from our last show, which was on a big open field, to more technical courses and tighter turns.”

Leading the round of honor for Region 2, Griffiths, 16, rode Mac One III to top 32 fellow riders. Mac One III is a former international show jumping mount under the direction of owner and U.S. Olympian Lauren Hough and will carry Griffiths in her third appearance at the National Horse Show.

“I’m super happy right now,” said Griffiths, who trains with Frank Madden and her mother Jennifer Madden at Capitol Hill Stables, as well as Missy Clark and John Brennan of North Run based out of Warren, VT. “My goal was just to get through to Maclay Finals and this was a greater surprise than I could have hoped for. It’s an honor to show in the finals. So many great riders have won it and just to be able to go there is amazing.”

Griffiths got the ride on Mac One III during the 2018 winter season in Wellington and continued their partnership throughout the spring, summer, and fall seasons, saying, “Missy gave me the ride and he came home with me after Lake Placid. I have formed a great bond with him.”

Familiar with the Old Salem Farm indoor arena as a former student there during Madden’s tenure as head trainer, Griffiths was happy to return to comfortable territory, saying, “Riding indoors is so different; everything changes. It’s very nerve-wracking, but I got to watch all of Region 1 and it was really nice to come back to this ring and be comfortable.”

Competition at Old Salem Farm continues with the American Gold Cup CSI4*-W running September 26 through 30 and highlighted by the $204,000 Longines FEI Jumping World Cup™ New York on Sunday, September 30, as part of the Longines FEI Jumping World Cup™ North American League. Tickets for the American Gold Cup can be purchased here, and the event will also be streamed live at www.theamericangoldcup.com.