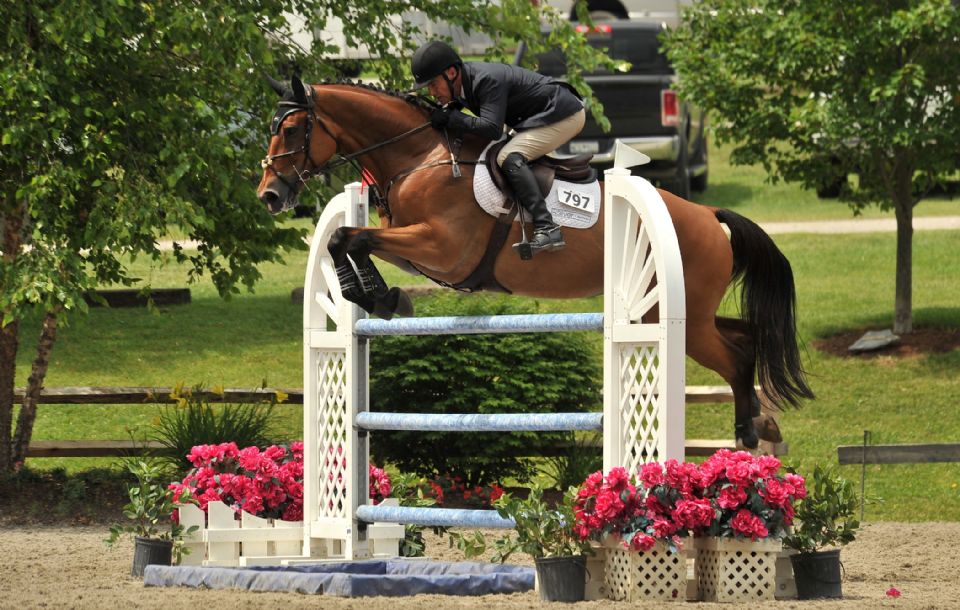 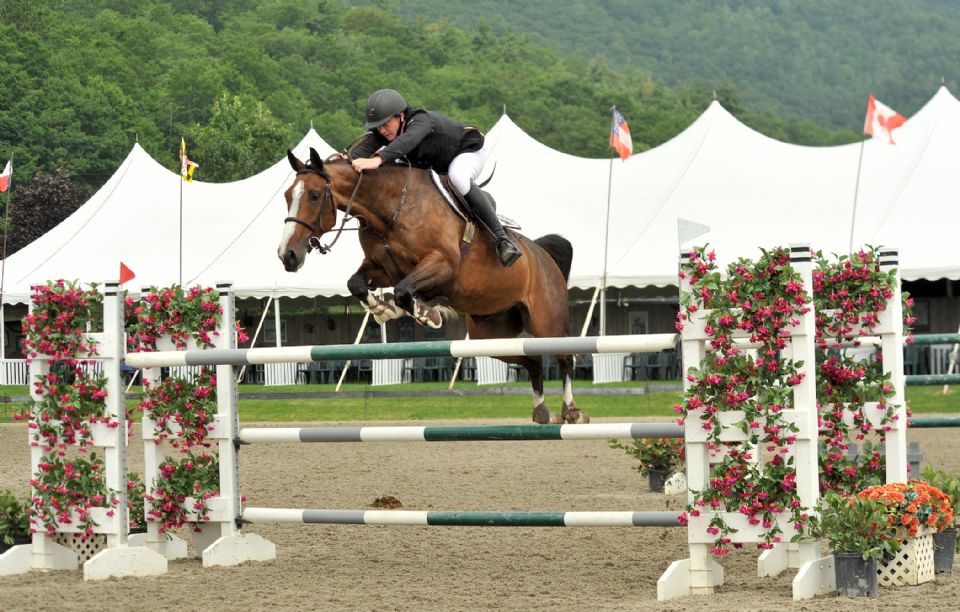 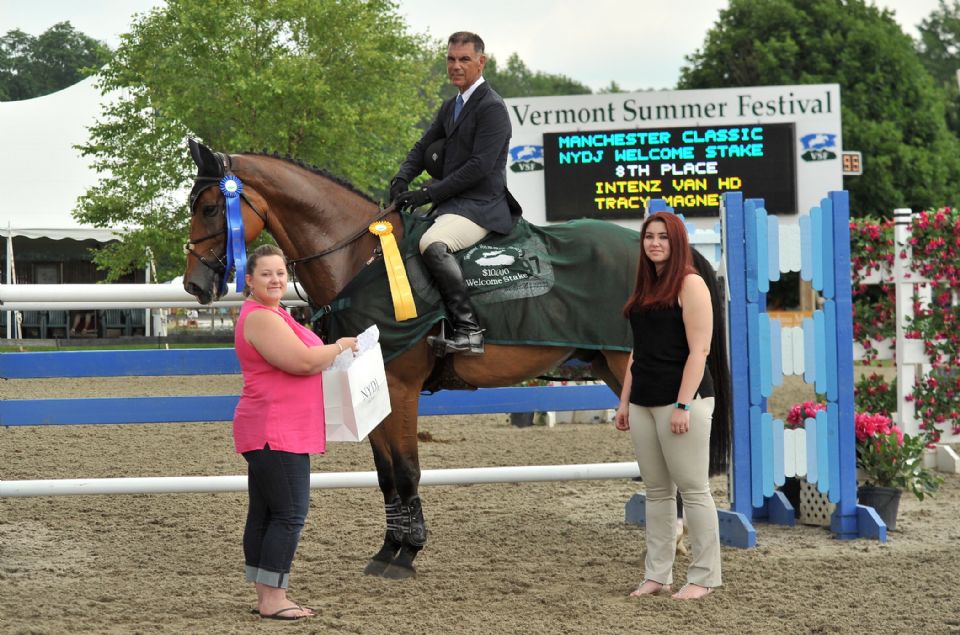 Jimmy Torano and Armageddon are presented as the winners of the $10,000 NYDJ Welcome Stake, presented by Manchester Designer Outlets, by NYDJ representatives Kate Hunter and Marissa Thomas on Thursday, July 20, at the Vermont Summer Festival in East Dorset, VT.
Photo by Andrew Ryback Photography

Jimmy Torano of Wellington, FL, dominated the $10,000 NYDJ Welcome Stake, presented by Manchester Designer Outlets, by finishing first, third and fourth on Thursday, July 20, during the third of six weeks of consecutive competition at the Vermont Summer Festival running through August 13 at Harold Beebe Farm in East Dorset, VT.

Torano and his winning mount, Armageddon, were one of ten horse-rider combinations to advance to the jump-off over the course designed by Kenny Krome of Westminster, MD. As the final jump-off challengers, Torano and Armageddon stopped the clock clear in 33.87 seconds to overtake the lead from Ireland’s Jordan Coyle, who had crossed the timers in 34.93 seconds. Coyle, who rides for Old Salem Farm based in North Salem, NY, settled for second riding Escalette, owned by Elan Farm.

Torano continued his domination with double-clear efforts on Diamant des Biez, his winning mount for week two’s Welcome Stake, with a time of 35.51 seconds to take third while Dutch Lady crossed the timers in 37.43 seconds for fourth place. Colin Syquia of Forest Hills, NY, rounded out the top five after again jumping clear in the jump-off with Hamilton Boy DW in a time of 38.85 seconds.

“This horse is brand-new to me, and this week is only our third show together,” said Torano of the 12-year-old Dutch Warmblood gelding by Solitair that had previously been competed by Venezuelan rider Alvaro Lozada as well as Israel’s Daniel Bluman. “He has not done a whole lot lately, so we used Lake Placid to get him back in the groove and fit again. Now I think he’s ready to win some good classes.”

While Armageddon is a new ride for Torano, he had spotted the horse’s talent before it was imported to the United States.

“He came from my dealer in Europe, so I have known him for a long time, always liked him, and wanted to have a try at him,” explained Torano, 52. “It finally ended up falling in my lap when Alvaro arranged to have the horse sent to me to be sold.

“He’s quite nice to ride,” continued Torano. “He appears to be a little bit of a bigger, slower horse, but he’s very careful and actually very quick. He doesn’t want to hit the jumps, and he proved that by running yesterday and coming back to run again today and holding it all together.”

Torano capitalized on Armageddon’s speed and carefulness to leave a stride out to the third jump in the jump-off before galloping down the final line to take the win.

“He has turned out to be a really good horse to have in my second string of horses,” said Torano. “My top horse, Daydream, and the ones I ride for North Run are resting now, so it is nice that I can use these horses to fill in the gaps and rest them when the other ones come out later in the circuit.”

In addition to his share of the prize money and a commemorative scrim from Mona's Monograms, Torano was presented with a $1,000 gift card to the NYDJ outlet store in Manchester, VT, by NYDJ representatives Kate Hunter and Marissa Thomas.