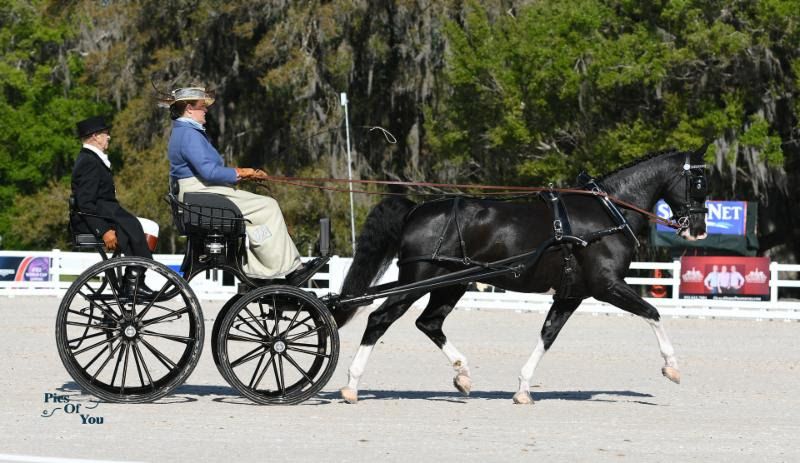 Dr. Jennifer Thompson is one driving athlete who has seen the benefits of the Developing Athlete Program.
Photo by Pics of You

Through the Driving Challenge, multi-year gift commitments of $20,000 or more are matched dollar for dollar, up to $500,000, by Misdee and James Miller, Steve Wilson, and Laura Lee Brown.
Photos courtesy of the USET Foundation

Misdee and James Miller, Steve Wilson, and Laura Lee Brown initiated the United States Equestrian Team (USET) Foundation Driving Challenge in 2017 with a goal of raising $1,200,000 for the U.S. Equestrian High Performance Driving program, and today, the loyal supporters and active drivers remain committed to closing in on that goal.

Through the Driving Challenge, multi-year gift commitments of $20,000 or more are matched dollar for dollar, up to $500,000, by the Millers, Wilson, and Brown, who encourage fellow drivers, owners, and enthusiasts to help create a legacy for the High Performance Driving program by rising to the Driving Challenge.

“We created the Challenge because driving, historically, is such a small discipline, and it hasn’t been able to be very well-funded,” said Misdee Miller. “Early on, we recognized that we not only needed to raise funds for our athletes traveling abroad, but most importantly, fund programs and drivers at home.”

The Driving Challenge created a source of funding that can be drawn upon each year and has provided increased support for the Developing Athlete Program (DAP), which has been instrumental in the careers of up-and-coming drivers. A large percentage of the funds are allocated to hiring coaches running educational clinics across the country. There are also plans to develop an international working student program so that drivers can gain valuable first-hand experience competing in Europe.

“So far, the program has thrived and blossomed and has helped a lot of drivers,” continued Misdee Miller. “We’ve taken them from Preliminary all the way to becoming national champions. That’s the best way to recognize if a program has been successful or not.”

Dr. Jennifer Thompson is one such athlete who has seen the benefits of the program first-hand, after coming up through ranks from the Preliminary level all the way to being named the 2019 USEF Advanced Single Horse Combined Driving National Champion.

“I look back to where my horse and I were and to where we are now, and I just think, ‘Wow, we’ve come a long way!’ I have to attribute the vast majority of my success to the opportunities I’ve gotten through the DAP,” said Thompson, who works as a full-time equine veterinarian in Wisconsin. “I’m so thankful to those who have contributed to this program because it has helped me get to where I am today.”

Nifty Hamilton, who was the highest placed U.S. Combined Driver at 2018 FEI World Driving Championships for Singles, also credits the program with her success.

“The High Performance Program has been the cornerstone to my development as a driver and the training of [my horse] Makari Design up through the levels,” said Hamilton. “The quality and variety of the clinicians, in both training and lectures, that the USEF has offered, continue to move me forward toward my goals.”

“We’re really hoping we can get people excited about funding new drivers,” concluded Misdee Miller. “It’s training and developing and supporting drivers on their pathways from the grassroots all the way to ‘pre-podium.’ If we realize our goals, we would raise over a million dollars for driving. That would be quite historic.”

Learn more about being a part of history and making a donation to the Driving Challenge by contacting Bonnie B. Jenkins at bjenkins@uset.org or by phone at 908-234-1251.