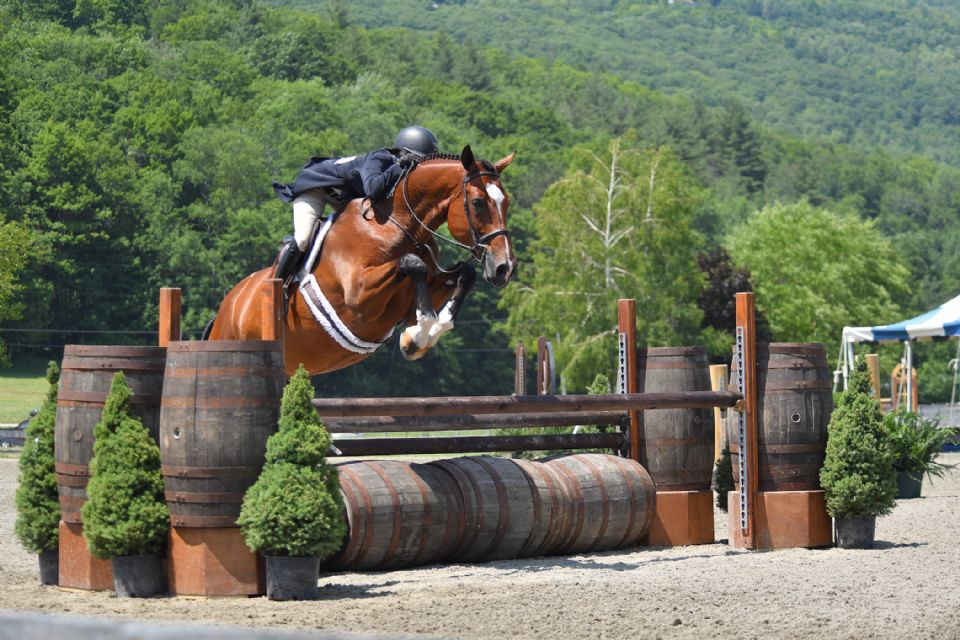 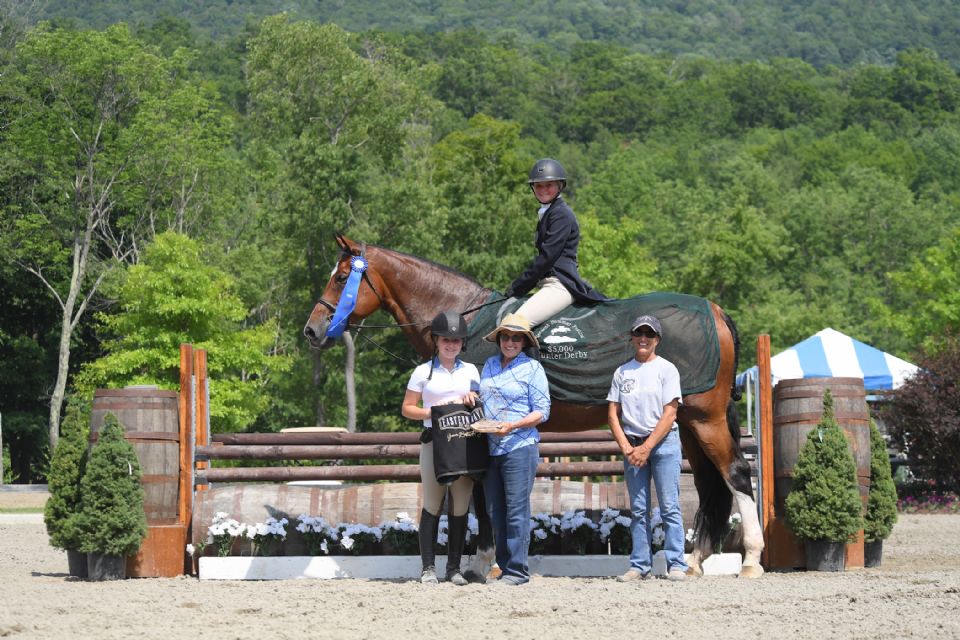 Morgan Ward and Cypress are presented as the winners of the $5,000 NEHJA Hunter Derby, presented by Eastern Hay, on Thursday, July 5, along with team members (from left to right) Ruby Verga, Sandra Lobel, and Anna Ross at the Vermont Summer Festival in East Dorset, VT.
Photo by Andrew Ryback Photography

Morgan Ward won the $5,000 NEHJA Hunter Derby, presented by Eastern Hay, on Thursday, July 5, during the first of six weeks of competition at the 25th annual Vermont Summer Festival, which runs through August 12 at Harold Beebe Farm in East Dorset, VT.

Spanning two competition rings, the derby course, which featured both traditional hunter jumps and derby-style fences, was designed by Joe Carnicom of Toledo, OH. In the opening round, Ward of Milford, NJ, and her mount Cypress led off with a high score of 85 from judge Scott Hofstetter of Ocala, FL. The top 12 then returned in reverse order of standing, with Ward and the 11-year-old Dutch Warmblood gelding by Quidam de Revel being last to go.  The pair again bested the field with a handy score of 87 for a two-round total of 172, earning the win by 10 points.

Linda Orton of Stamford, VT, rode Demi to scores of 82 and 80 for a total of 162 and second place. Helen Goddard of Lincroft, NJ, scored an 84 and 77 riding My Way to finish third on a final score of 161. Kristen Bumpus of Concord, MA, rounded out the top five by finishing fourth on Trendsetter with a 158.5 total and also took fifth after finishing half a point behind riding Casper II with a total of 158. Both horses are owned by North Wind Farm LLC.

Ward took over the ride on Cypress for owner Bruce Green and trainer Sandra Lobel at the conclusion of the winter season and scored her first major win on the horse in the Vermont Summer Festival hunter derby.

“This is only my fourth show on him,” said Ward, 20, who is a professional working out of her family’s Willow Brook Farm based in Whitehouse, NJ. “He’s very scopey and has a lot of potential. When it comes to the jumps, the bigger the better for him.

“I thought was a lot of fun today,” continue Ward of the innovative design utilizing two rings and a variety of jump types. “It did not look easy at first, but it was easy for him. I went first in the order and had a solid round right away. When he walked into the derby part of the course he was like ‘let’s go’. Then in the handy, I took advantage of his turning radius because he turns on a dime.”

A young professional, Ward has been on her own for three years, noting, “This is my second year back at Vermont as a professional and I love it. My jumpers love it and my hunters love it. It’s a great venue.”

The first grand prix of the Vermont Summer Festival will highlight competition on Saturday, July 7.  Beginning at 1 p.m., the spectator-friendly $30,000 Vermont Summer Special Grand Prix will see the top horses and riders facing off for victory.

The Vermont Summer Festival is New England’s largest hunter/jumper competition and the richest sporting event based on purse in the state of Vermont with more than $750,000 in prize money. The event is also a proud member of the Show Jumping Hall of Fame, the Marshall & Sterling League, and the North American League (NAL). Outside the show ring, exhibitors are immersed in the charm of Vermont's shopping, dining, and outdoor activities.