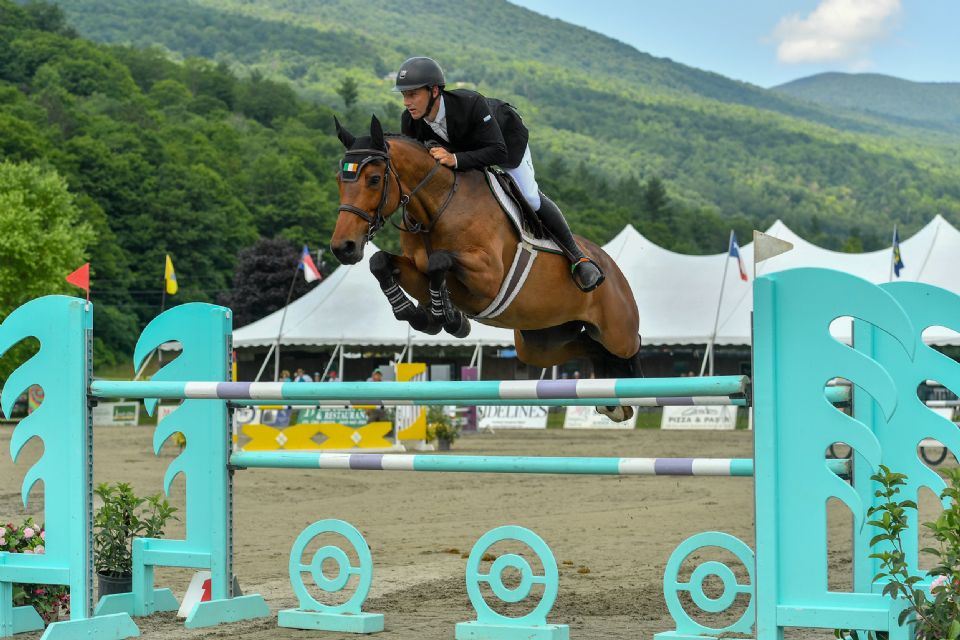 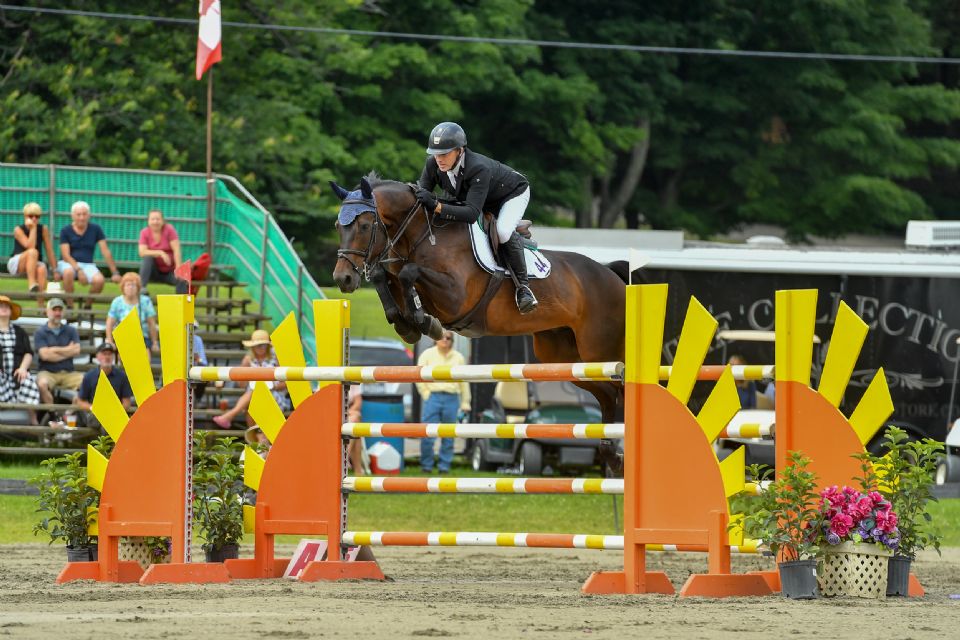 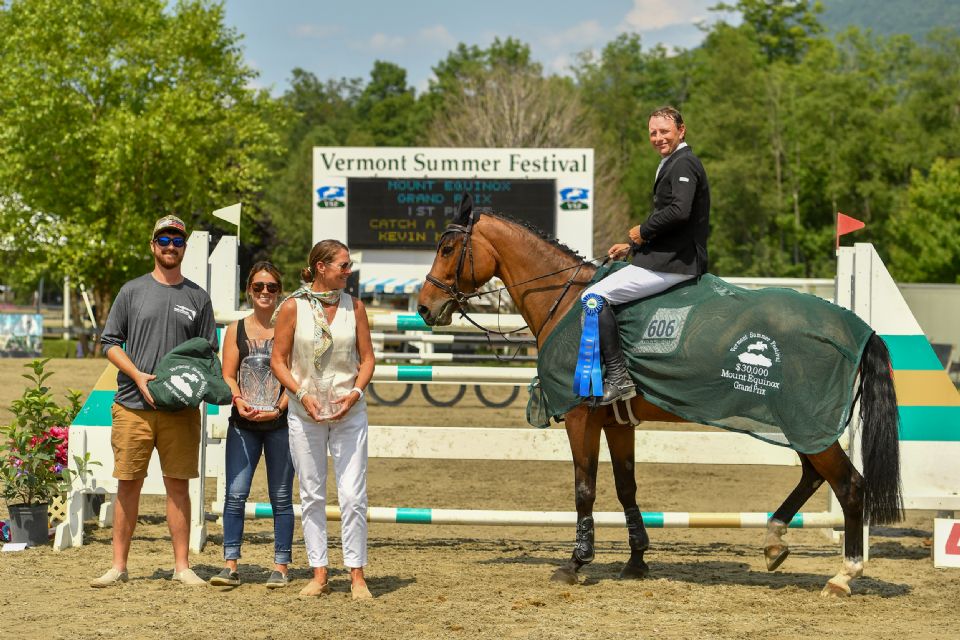 Kevin McCarthy and Catch A Star HSS, were presented as the winners of the $30,000 Mount Equinox Grand Prix by Jennifer Glass (far right) and joined in the ring by Kelsey and Keely O’Hara.
Photo by Andrew Ryback Photography

Ireland’s Kevin McCarthy and Catch A Star HSS topped the $30,000 Mount Equinox Grand Prix on Saturday, July 27, to keep their winning streak alive at the Vermont Summer Festival, which runs through August 11 at Harold Beebe Farm in East Dorset, VT.

Saturday’s jump-off came down to a five-horse face-off, but as the clear pathfinder and the first to return for the short course, McCarthy set a time to beat of 32.83 seconds that would prove uncatchable, securing him the win for the second week in a row.

“We’re on a great roll!” said McCarthy of his recent success with Catch A Star HSS, a nine-year-old Swedish Warmblood mare (Sheraton x Amulet) owned by Siboney Ranch. “I’m delighted with the win. She’s such a good mare. She’s like a little firecracker. Once the bell goes, she’s all business. She’s almost like a roller coaster. You just sit there and enjoy the ride.

“From the first time I showed her, I felt something special about her,” continued McCarthy in speaking of the mare that he’s had the ride on for the last year. “We just kept going, and she’s always answered my calls. We get on pretty well.”

Coming the closest to catching McCarthy and Catch A Star HSS was Cian McDermott of Wellington, FL, who finished both in second with a time of 35.96 seconds riding Newcastle, owned by Therese Bentley, and in third with a time of 40.06 seconds aboard Feliciano van d’n Otterdijk, owned by Schneiders Sporthorses.

Fellow Irishman Kevin Mealiff nearly had McCarthy’s time, crossing the finish line in 32.93 seconds aboard Joki de Boerendans, owned by Maarten Huygens. However, one rail down would relegate the pair to fourth place. Rounding out the top five was 19-year-old Adelaide Toensing, who finished with four faults in a time of 35.81 seconds aboard her own Blue.

“Kevin Mealiff gave it a good go there; he was unlucky to have a rail,” said McCarthy. “The jump-off suited my mare. It was a little bit of a galloping track. She’s naturally fast over and away from the fence.

McCarthy had initially planned to sit out week four of the Vermont Summer Festival and return for week five after going home to his base in Cazenovia, NY. But Catch A Star HSS had other ideas.  “She had a few days at home in the field,”  he said. “She was kicking at the door. So we said, ‘Let’s go back to the show!’ She’s in good health, and she loves it as much as I do.”

In recognition of his victory, McCarthy was awarded a crystal trophy as well as a show scrim from Mona's Monograms. McCarthy’s partner, Keely O’Hara, was presented with the weekly Grand Prix Groom Award in honor of her hard work preparing Catch A Star HSS for grand prix competition. She was presented with a monogrammed jacket and coolerette from sponsor Glenn Geary of Horsewatch.

The fourth week of show jumping competition at the Vermont Summer Festival continues with classics for adult, children, and junior and amateur-owner jumper riders in the Grand Prix Ring on Sunday, July 28.

Competition at the 2019 Vermont Summer Festival runs weekly from Wednesday through Sunday, beginning each day at 8 a.m. Admission is $5 for adults and children from Wednesday through Friday. On Saturday and Sunday, admission is $10 for adults and $5 for children with 100 percent of all gate proceeds benefiting Dorset Equine Rescue, The Dorset School, and Manchester Community Library.