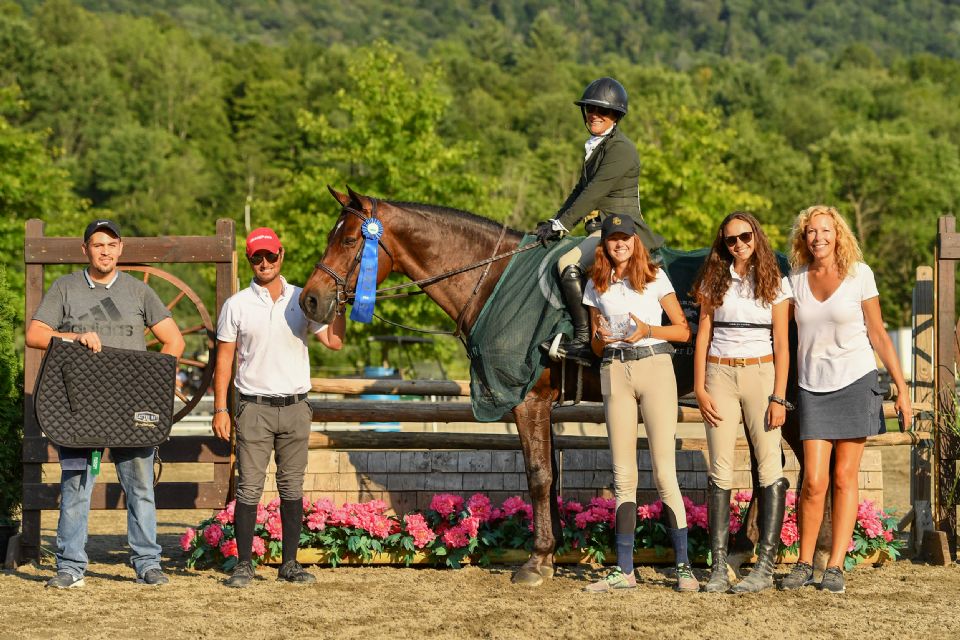 Jennifer Ritucci and Quidam’s Reveal were presented as the winners of the $5,000 NEHJA Hunter Derby, presented by Eastern Hay, and were joined in the winners’ circle by Quidam Reveal’s team and owners.
Photo by Andrew Ryback Photography 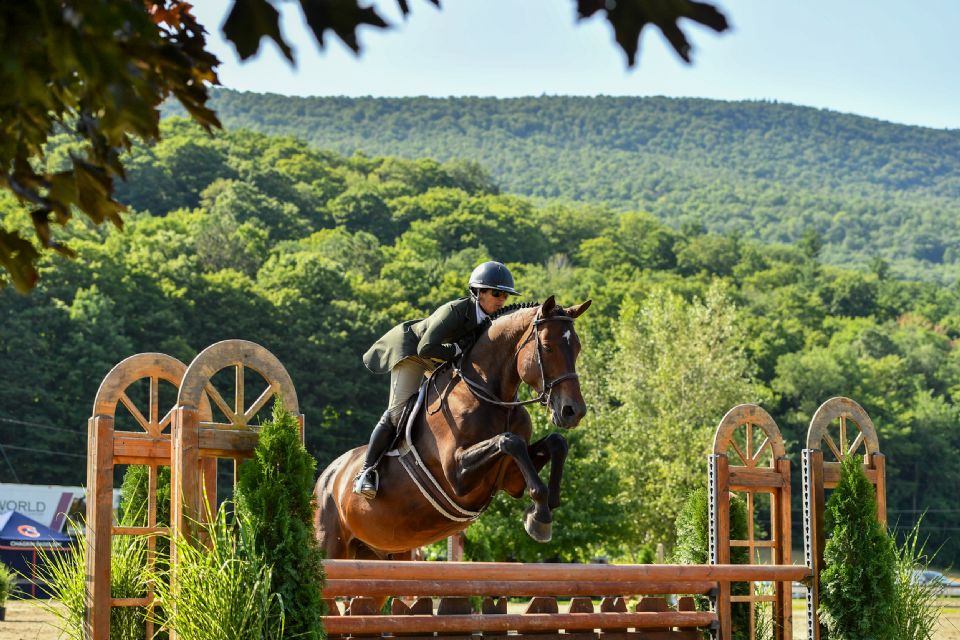 Jennifer Ritucci of Franklin, MA, and Quidam’s Reveal topped the $5,000 NEHJA Hunter Derby, presented by Eastern Hay, on Thursday, August 1, at the Vermont Summer Festival, marking the second year in a row that the pair has won the derby event held during week five of the six-week show series that runs through August 11 at Harold Beebe Farm in East Dorset, VT.

A large starting field of 59 entries contested the first round of the derby course set across two competition rings by course designer Dean Battaglia of Woodstock, IL, with the top 12 horses from the opening round returning in reverse order of their standings for a handy round. With a score of 86 in the first round and 83.5 in the second round, Ritucci and Quidam’s Reveal led from beginning to end to take the victory with an overall score of 169.5.

“He hears the word derby, and he knows he has to put his game face on!” said Ritucci of Quidam’s Reveal, a 10-year-old Selle Français gelding owned by Sophia Carbone. “He tries to win every time. The derbies are his favorite thing to do. He loves it. The spookier the better, and the handier the better. He likes to win, and I think he had a lot of fun.”

While Quidam’s Reveal, or “Vinnie” as he is known in the barn, generally competes in the junior hunters with Carbone, Ritucci has shown him in the week five hunter derby at the Vermont Summer Festival for the last two years, winning each time. For Ritucci, the wins carry special significance.

“It was just the year anniversary of my friend Vanessa passing,” said Ritucci of Vanessa Lencewicz, a good friend to Ritucci and a barn manager who she had previously worked alongside who passed away unexpectedly just days prior to Ritucci’s 2018 derby win. “I feel like she has something to do with it. Somebody’s looking down on me.”

Finishing in second behind Ritucci and Quidam’s Reveal were Oakley Clark of New Haven, VT, and Ballinaboola Guy, owned by John Bourgoin. The pair earned a score of 83.5 in the first round and moved up from fifth to second with a score of 85 in the second round for a 168.5 total. Third place with a first-round score of 84, a second-round score of 83, and a 167 total score went to Megan Young of Jacksonville, FL, riding Red C, owned by Terrapin Hill Farm, LLC.

Finishing in fourth with an overall score of 164 was Lauren Schweppe of Ocala, FL, riding In Favor for owner Cynthia Boudreau, and fifth place with a total score of 163 went to Ciara Bolger of Canton, MA, riding Calafell, owned by Cheryl Buxton.

Competition at the Vermont Summer Festival continues on Saturday with the featured $30,000 Manchester & the Mountains Grand Prix beginning at 1 p.m.

Competition at the 2019 Vermont Summer Festival runs weekly from Wednesday through Sunday, beginning each day at 8 a.m. Admission is $5 for adults and children from Wednesday through Friday. On Saturday and Sunday, admission is $10 for adults and $5 for children with 100 percent of all gate proceeds benefiting Dorset Equine Rescue, The Dorset School, and Manchester Community Library.