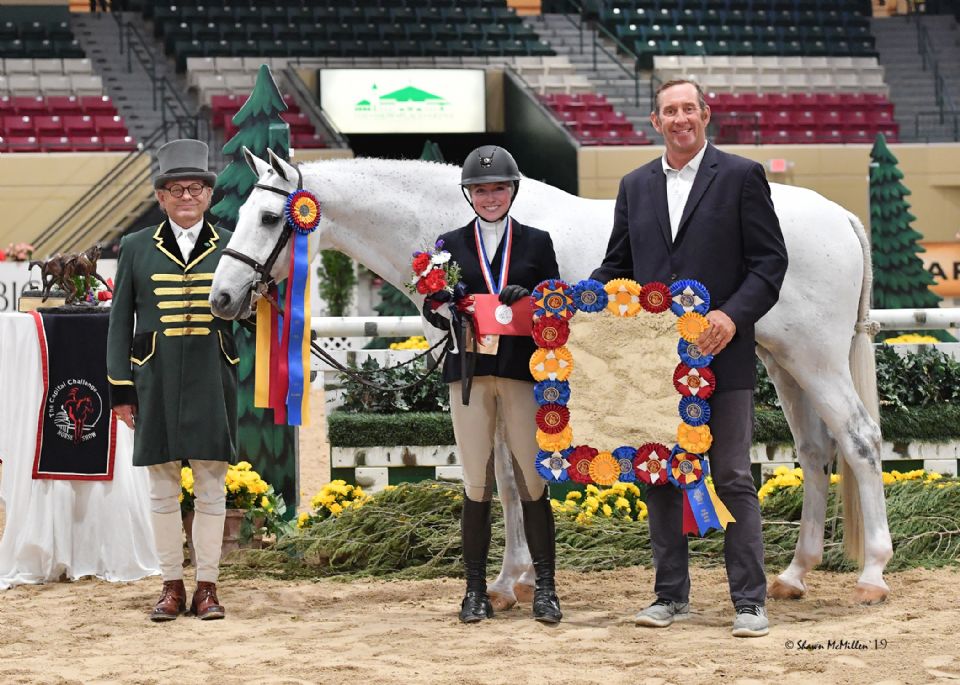 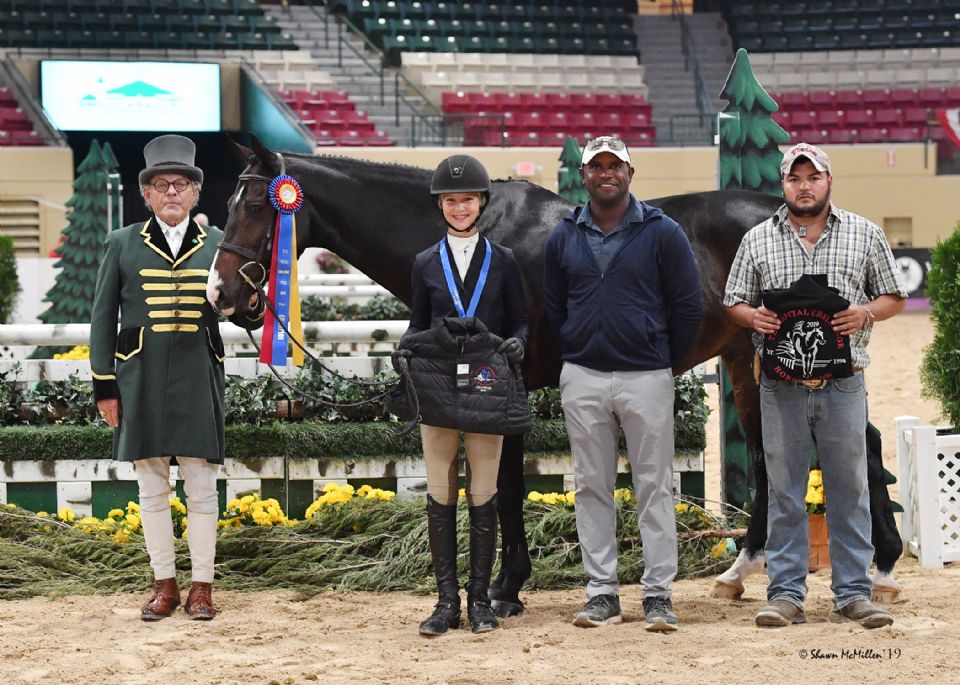 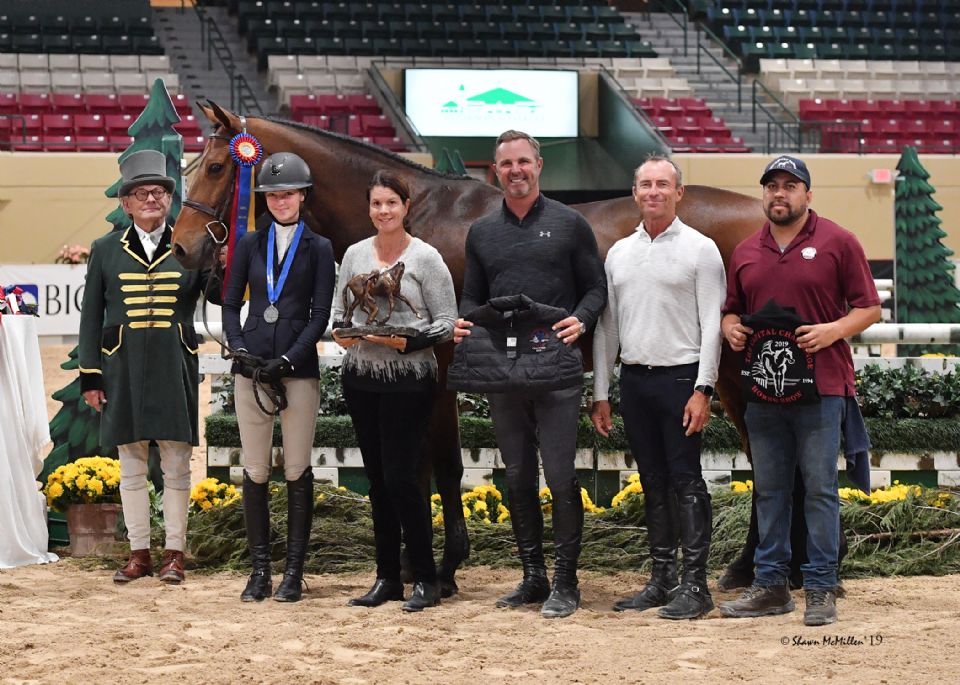 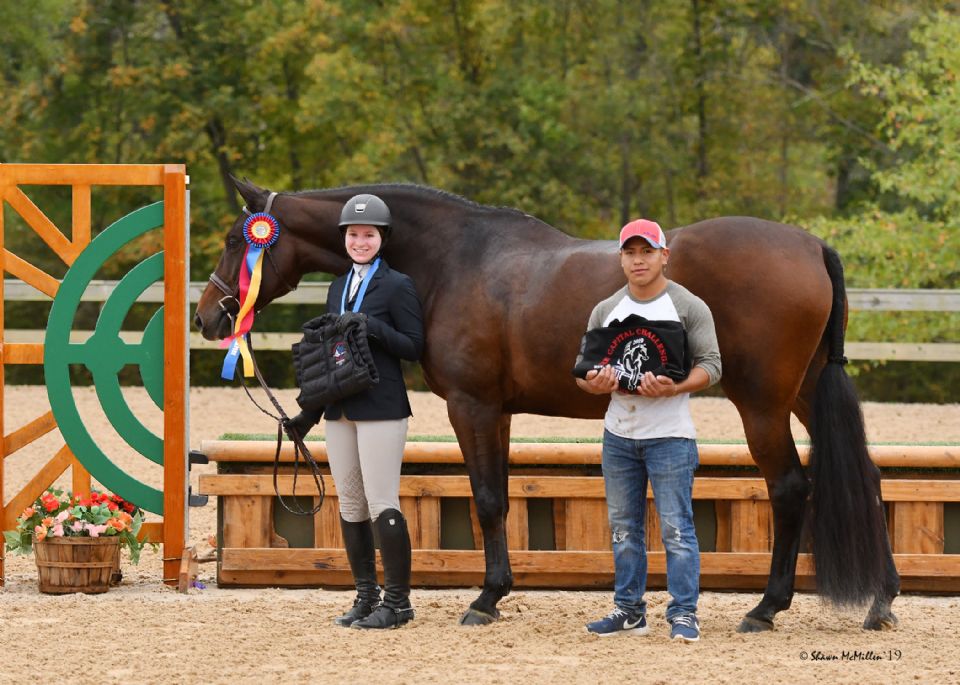 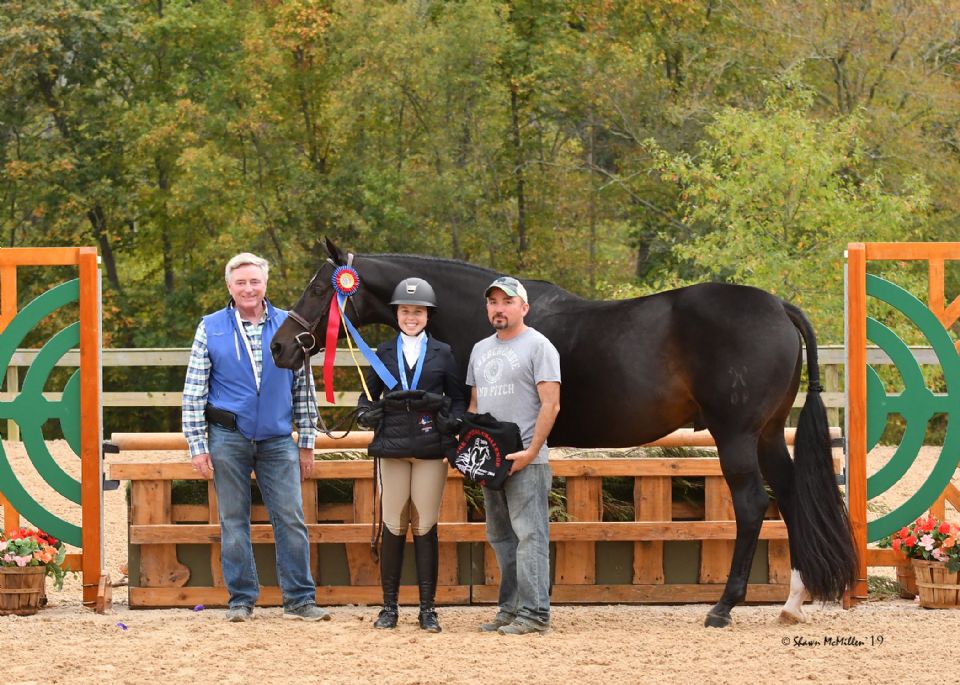 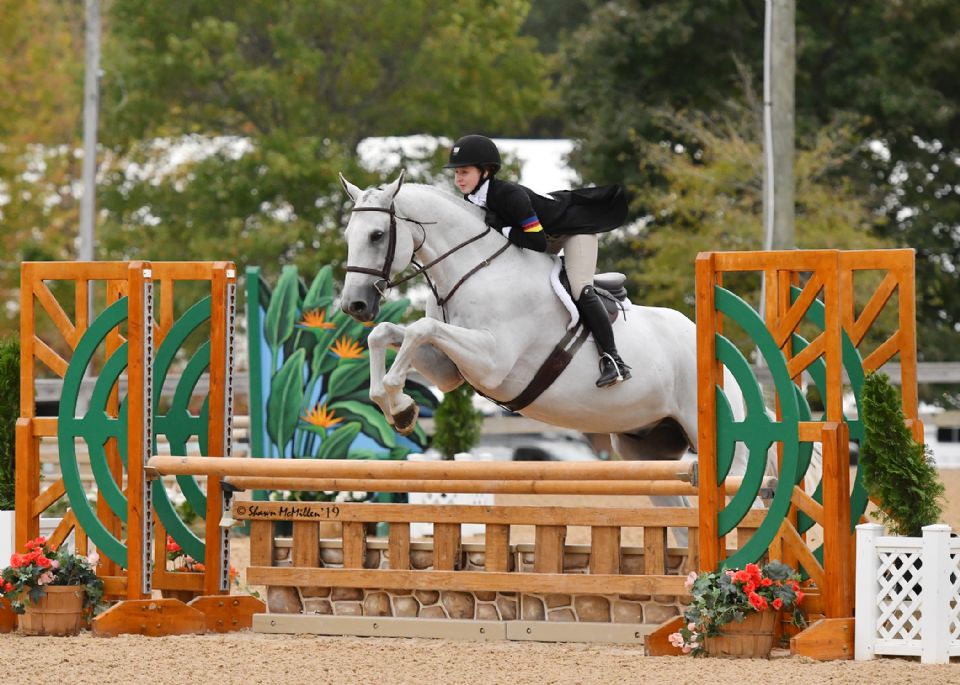 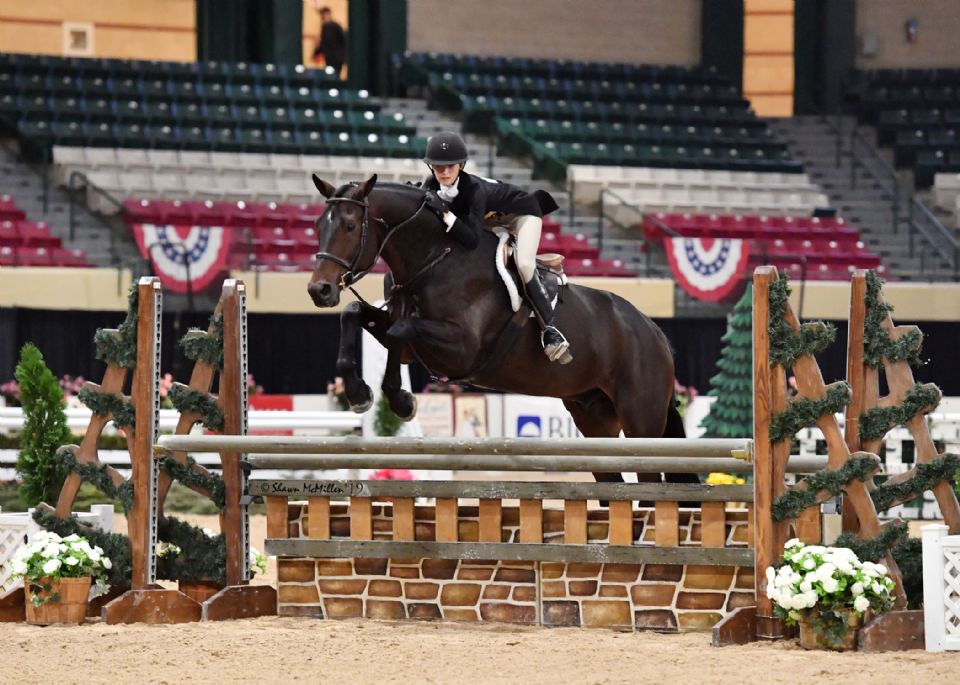 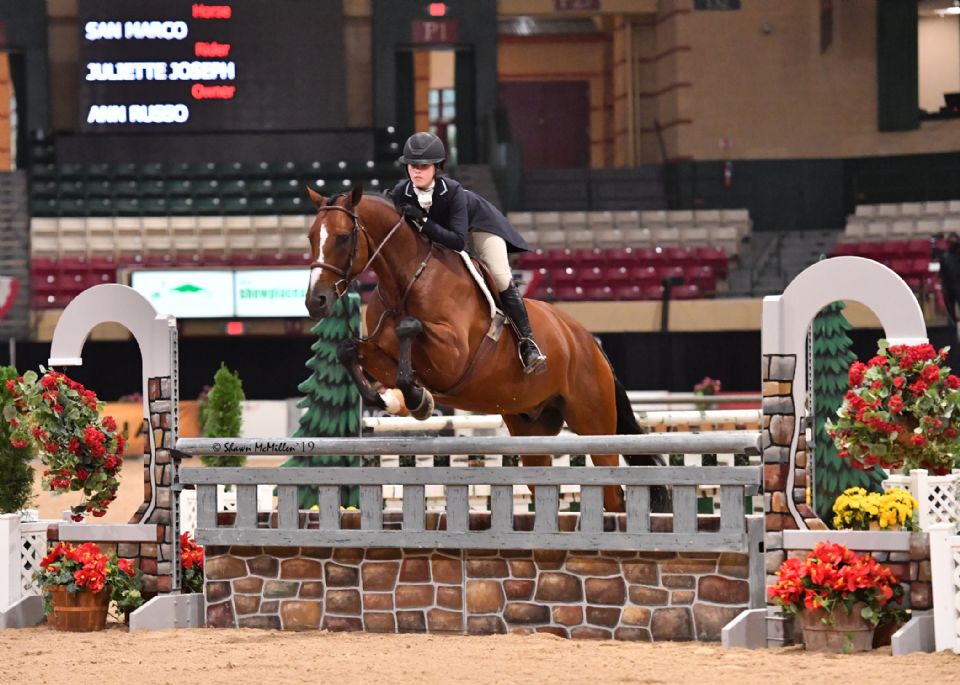 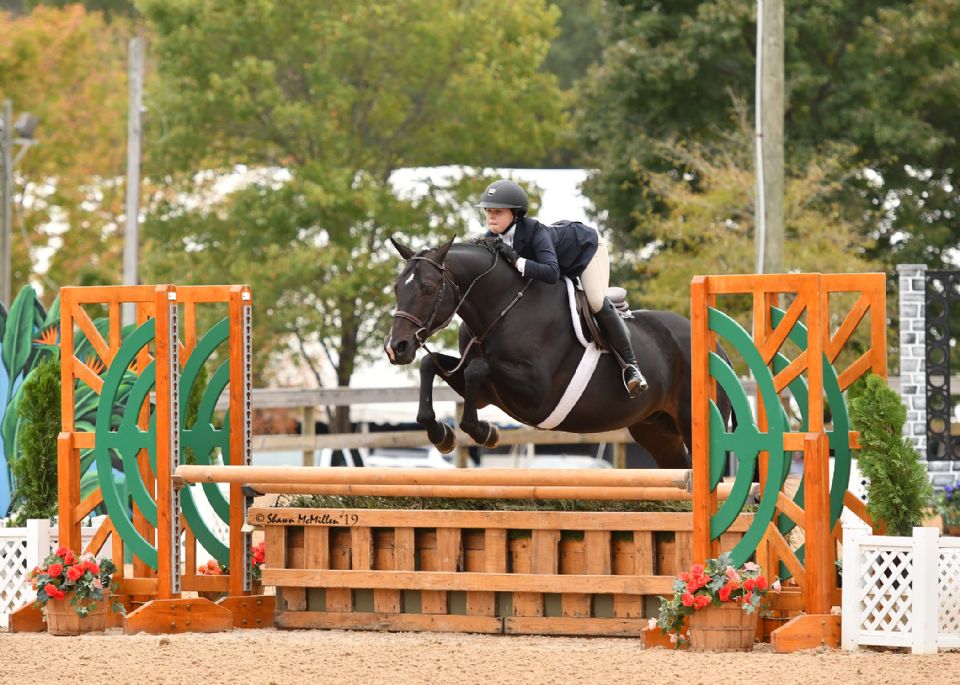 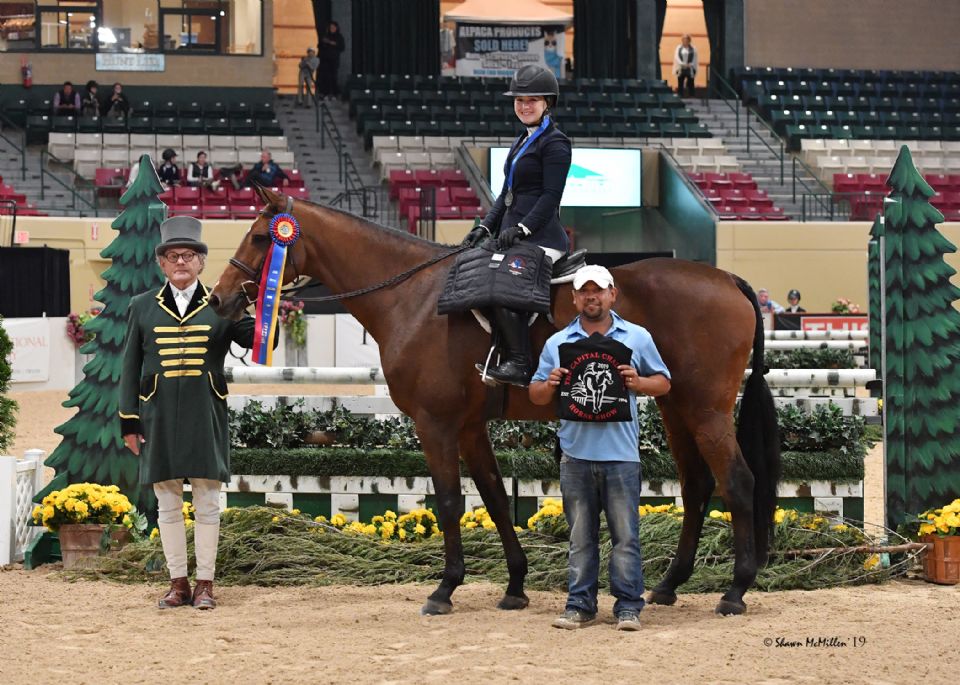 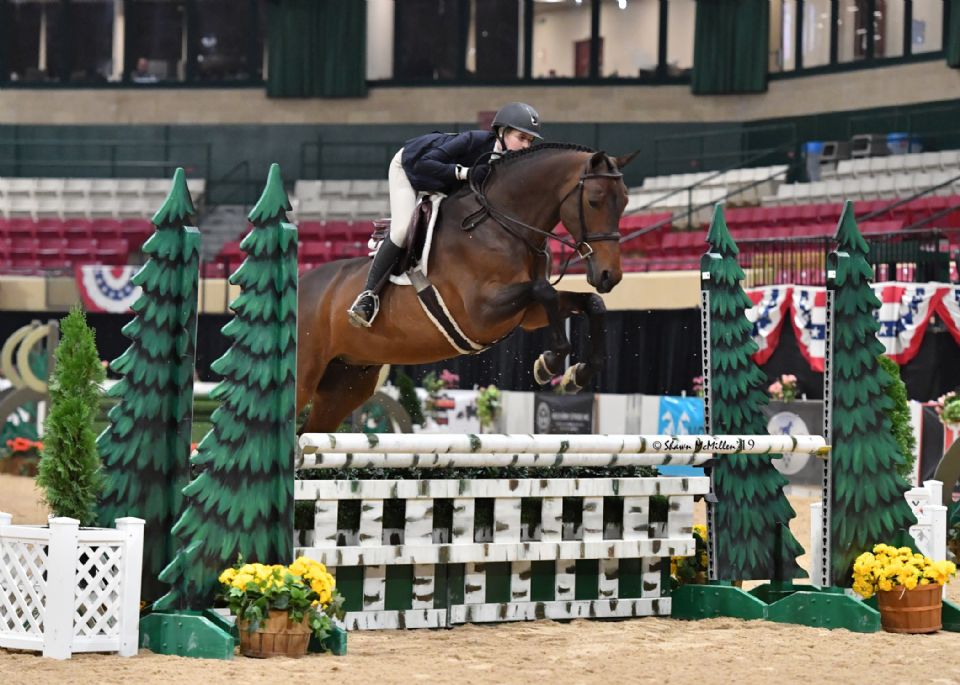 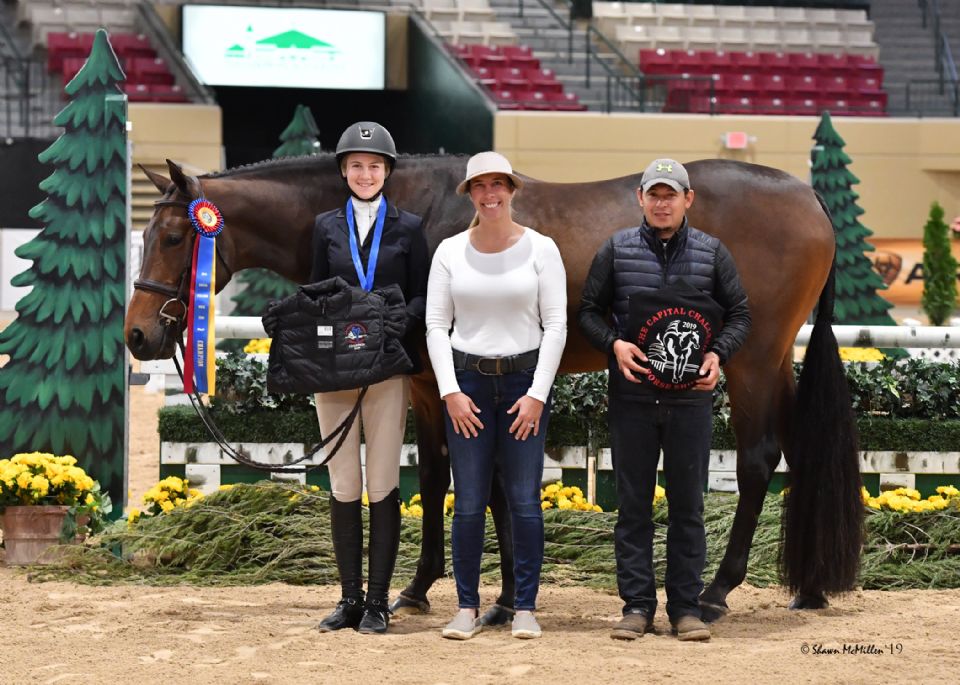 Williams, 17, of Newhall, CA, and the 10-year-old Holsteiner gelding claimed two wins over fences and a second place under saddle in the Small Junior Hunter 3’6”, 16-17 division to first claim the division championship before ultimately being named the High Point Junior Hunter, 16-17, sponsored by Somerset Farm, and clinching the Overall Grand Champion Junior Working Hunter title, sponsored by Shadow Ridge. For the top honor, Williams received the Spontaneous Perpetual Trophy, donated by the Listrani Family, as well as being named the recipient of the Best Junior Rider Award, sponsored by Karen Healey.

“It feels so amazing,” said Williams. “I’m so, so honored, and I’m just so happy. I thought [Beach Boy] was super consistent and jumped super well in every round.”

While Williams and Beach Boy may have claimed the highest Junior Hunter award, contesting the hunters was not actually Williams’ primary goal for her second visit to the Capital Challenge Horse Show.

“He had to end up stepping up and being my equitation horse, so the hunters were kind of just for fun this week!” said Williams who has owned and ridden Beach Boy for four years after initially purchasing him for the jumper ring but soon transitioning him to the hunters and now the equitation as well. “I always thought he would be a nice hunter since the day I got him. He’s always just loved it. I’ve done him in the [International and National Hunter Derbies]. He’s always been so amazing.”

Williams made the trip to Capital Challenge from Texas Christian University where she is a freshman studying business and competing on the school’s National Collegiate Equestrian Association (NCEA) team.

“Before college, I’ve always done all the riding on him myself,” said Williams, who trains with Archie Cox. “Having Archie ride him too has been amazing. He’s been super prepped since I’ve gotten here. He’s been perfect in every round and never looked at a jump. He jumped everything the same, and he’s been amazing.

“He is a total puppy dog,” continued Williams. “I walk into the barn and I yell his name, and he whinnies so loudly. He is everyone’s best friend.”

Morin, of Calabasas, CA, and For Fun finished first and second over fences and second on the flat for the championship win, while Rudnicki, of The Woodlands, TX, rode Calou to a first, second, and third place over fences to top the Small Junior Hunter 3’6”, 15 & Under division.

The Best EMO Junior 3’6” Trip of the Show, sponsored by the EMO Agency, went to Rudnicki and Calou with a score of 88.

“This is all quite new for him,” Goldstein said. “He’d never been in the indoor before, and he was so great. It all just came out so nicely. He’s a really quiet horse and very straightforward. He’s a little lazy, but I tend to like horses like that.”

Goldstein, 14, has only had Higgs, a seven-year-old Dutch Warmblood gelding, since June. “I like how he’s young, and we’re still developing him, which is fun,” Goldstein said. “He’s so good-minded; he acts like he’s been doing this for years. I just got three new horses at the beginning of the year, so it’s been a challenge to get to know them all and get them prepared. It’s nice to have this win at the end of the year.”

This was the second year of showing at Capital Challenge for Goldstein, who rides with Courtney Lenkart. “It’s a fun experience. You come together with all your friends and meet new friends. It’s fun, but it’s also a little bit challenging,” she said.

Finishing as the reserve champions in the Junior Hunter 3'3", 14 and Under behind Goldstein and Higgs were Maddie Tosh and Cold Harbor, owned by Betsee Parker.

In the Junior Hunter 3'3", 15-17 division, the championship came down to a three-way hack-off for the tricolors, with Sydney Hamel and Worthy, owned by Sunset View Farm LLC, prevailing for the championship and Susannah Gerhardt and Northface, owned by Ashland Farms, taking the reserve championship.

Signorino, of Basking Ridge, NJ, and the 15-year-old Hanoverian gelding finished first and fourth over fences and sixth under saddle to first earn the Children’s Hunter 14 & Under division championship, sponsored by Mr. and Mrs. Gary Duffy and Little Brook Farms, Inc.

For their consistent results, the pair was presented with the Laura Pickett Memorial Trophy, donated by Julia Karpan, as the Grand Champion Children’s Hunter winners, and Signorino also received the Best Children’s Hunter Rider Award, sponsored by Wild Sky Farm and the Nelson Family.

“It means a lot because I’ve only had [Outlook] since Country Heir in Kentucky [in July],” said Signorino, 14, who trains with David Belford and Christopher Payne at New Hope Farm in Ohio. “We’ve been doing so well at every show we’ve gone to. He’s very fun – especially his canter. His canter is so rhythmical. It’s so nice.”

Signorino is no stranger to success at Capital Challenge, having won the Grand Pony Hunter Championship aboard Anisette in 2017.

“I love all the rings here and how it prepares you for the rest of indoors with the indoor ring here,” said Signorino. “It’s just so fun.”

Finishing behind Signorino and Outlook as the Children’s Hunter 14 & Under reserve champions were Sydney Raidy and Cartani Croft, owned by Anna Gassib.

The champion of the Children’s Hunter 15-17 division was Jade, ridden by Claire Healy and owned by Shaw Johnson Price. The reserve championship went to Anna Mae Saunders riding Casallo, owned by Erin McGuire.

In the $1,500 WCHR Children’s Challenge, sponsored by Stephanie Bulger & MeadowView, the victory went to Peyten Seltzer and her own Que Crème.