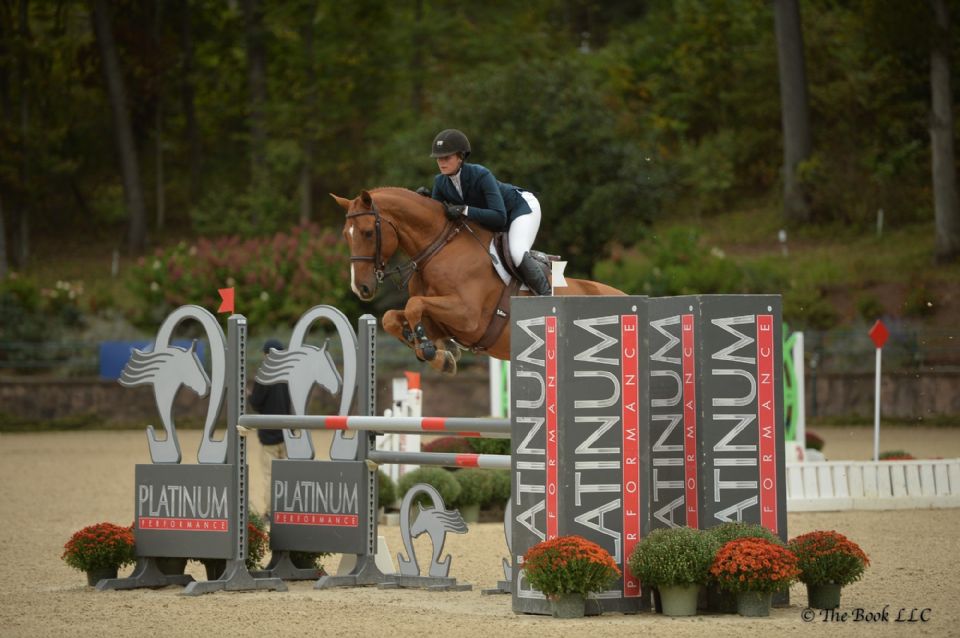 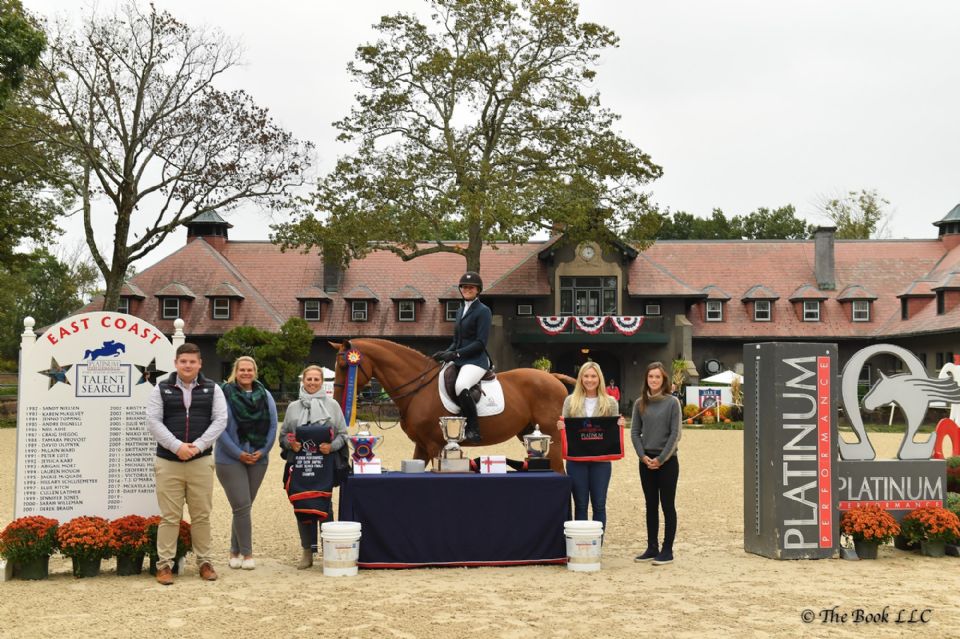 “I find it such an honor to be able to take the top spot in this final,” said Ferrigno. “It’s such a cool thing to do a final where US Equestrian is watching you and looking for people to be up-and-comers in the sport. It was a big honor to compete here in general.”

The 2019 Platinum Performance/USEF Show Jumping Talent Search Finals, held on the East Coast and the West Coast, is an essential building block in the U.S. Show Jumping Athlete Pathway. The phases were split over two days; the first day of competition hosted Phases I and II. In Phase I, judges looked for the rider’s ability to effectively demonstrate several flatwork exercises. During Phase II, riders applied the skills from the flat to a gymnastics course.

The mother/daughter duo of Sue Ashe and Molly Ashe-Cawley were judges for the competition as well as course designers with consultation from the USEF Talent Search Technical Delegate Anthony D’Ambrosio.

In Round III of the Phase IV ride-off, Gibbs was riding Itteville, an 11-year-old Belgian Warmblood gelding owned by Redfield Farm and the mount of Steckbeck. In round three of the Phase IV Ride-Off, Itteville was removed from the competition due to soundness concerns. It was determined the horse should not continue with the final Phase of the competition.

As the prize list states, if a horse is not fit to participate in the second, third, or fourth round, the results it had obtained thus far, other than its result in the first round, are cancelled. The Finalist of the horse that is unable to continue will not participate in the fourth round. In this case, the total result of each Finalist is determined over three rounds, one on his/her own horse and two on other horses.

For Ferrigno, who has only competed once before in the Talent Search Finals, it all came down to the fourth phase of competition. She rode her junior jumper Discovery-O, an 11-year-old Dutch Warmblood gelding by Douglas that she leases from Derbydown, for the first three phases and the first round of the ride-off.

“I just started riding Discovery at beginning of the summer,” said Ferrigno. “He’s my high junior jumper, and he’ll be competing at the Prix des States next week. He is the horse I can always count on. I don’t have an extensive partnership with him, but every class he goes in, I feel like he tries his hardest. I’m so proud that in the final four for every person, I thought he was such a good boy.”

After scoring 88.5 in flat phase for seventh place, she jumped up to third place with a solid score of 94.8 in the second gymnastics phase. She received a score of 92.5 in the third jumping phase and sat in fourth place going into the ride-off with 415.6.

The top four riders all start equally on a clear slate for scores in Phase IV. Ferrigno rode all four horses to clear rounds, and her top three scores were counted for a total Phase IV score of 269 for the win.

“After [the gymnastic phase], I took a big, deep breath and felt really good about the final day,” recalled Ferrigno. “I ride so many horses all the time, so going into final four I was so excited. After each horse I would get off and say how much I loved riding their horse!”

This was only the second time that Ferrigno has switched horses before in an equitation final, but she felt prepared to compete on unfamiliar horses.

“My trainer Val [Renihan] has always made sure that I have amazing rides,” she explained. “I own one equitation horse, FRH Remarkable, and he is fantastic, [but] I get to do many other things. I’ve been able to spend time developing good hunters. Almost everything I ride is for sale.”

The reserve championship went to Stearns. They started competition in fifth place after a score of 90 in the flat phase. They moved up to second in the gymnastics phase with a 94.5 and stayed in second place after a phase III score of 93 and a total of 417.8 before the final ride-off.

Stearns started out the ride-off on her own horse, Acer K, an eight-year-old Warmblood gelding owned by North Run, with one time fault. She went on to have good rides on Cent 15 and Discovery-O but did not ride in the final round due to her scheduled horse, Itteville, being removed from competition. It was very close competition as the judges gave Stearns three scores that combined for a total of 268 and second place.

“I appreciate this class because it shows off the fundamentals and has you work on things like flatwork and basics and everything that you build on top of, better,” said Stearns. “I would like to say thank you to everyone at North Run for giving me the opportunity to ride [Acer K]. This was his first big equitation final, and he couldn’t have been any better. He’s only eight; he’s essentially a genius.”

Third place went to Steckbeck, who started out in ninth place with an 88 in the flat phase and moved up to fourth after a score of 94.5 in the gymnastics phase. She rode to a 95 in Phase III and were leading with a score of 419.8 before Phase IV. She rode her horse Itteville first and then competed with Acer K and Cent 15. With faults on two of her rides, Steckbeck finished with a Phase IV score of 224 for third place.

“It’s an honor to be at the top [of this class] because it puts you on the map to go further in the sport,” said Steckbeck. “I’ve also never been in a final four situation,n and I have a lot to learn still.”

Finishing in fourth place was Gibbs, who received a 91 in the flat phase for second place. He recorded a stunning score of 98 in the gymnastics phase, which moved him into first place in the standings. With an 89.5 in Phase III, he was in third place with a total of 417 going into the ride-off. He rode his own horse, Cent 15, an 11-year-old Hanoverian gelding owned by Mountain King Ranch LLC, to four jumping faults and one time fault. He had good rides on Discovery-O and Acer K, the other two horses that counted toward his total score of 203.

“This is actually my first year doing the 3’6”, so I don’t have a lot of experience in testing and situations like this,” said Gibbs. “It really gave me a lot of mileage and things to work on and prepare for the future.”

For the 2019 year, the Show Jumping Talent Search medalists include:

The USEF Talent Search Program encourages young and junior riders to develop the skills needed to become an effective jumper rider, preparing them to become the next generation of top international riders representing the United States.