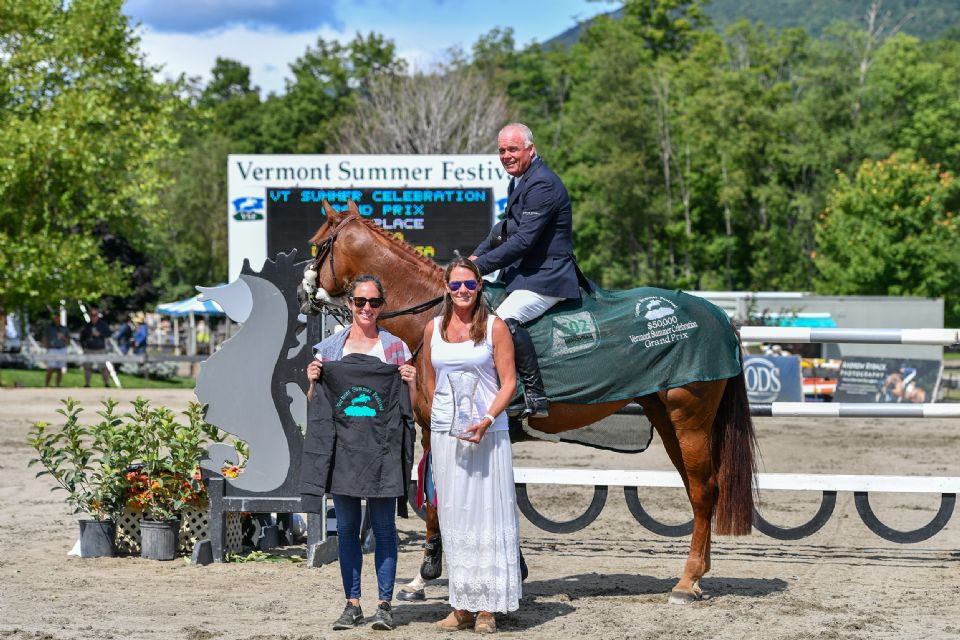 David Raposa and Iliona were presented as the winners of the $50,000 Vermont Summer Celebration Grand Prix by Jennifer Glass (pictured right) and were joined in the ring by Bryn Stromberg (pictured left), the weekly Grand Prix Groom Award recipient.
Photo by Andrew Ryback Photography 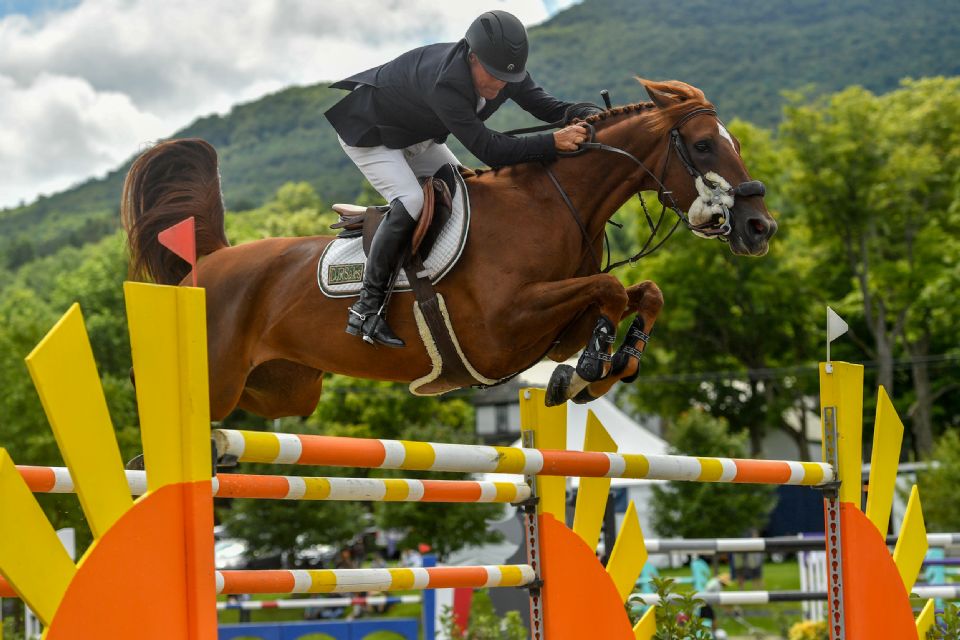 David Raposa of Clinton, NY, and Iliona won the $50,000 Vermont Summer Celebration Grand Prix on Saturday, August 10, during the final week of the six-week Vermont Summer Festival, which concludes on Sunday, August 11 at Harold Beebe Farm in East Dorset, VT.

Seven horse-and-rider combinations who traversed the first-round track of the finale grand prix without fault returned to jump off over the short course designed by Ken Krome of Westminster, MD.

As the fifth pair to return, Raposa and Iliona crossed the finish line timers with a clear round in 40.49 seconds to take over the top spot and ultimately clinch the victory.

“When I walked the course, I was hoping I’d get [Iliona] in the jump-off because it favored her a little bit,” said Raposa, who knows Iliona is quick across the ground and favors left-hand turns, both of which played well to Saturday’s jump-off track. “She jumped the first round awesome. She’s been going really well recently. She’s a fast horse naturally; you don’t have to chase at her. She’s a goer.

“I didn’t want to go too stupid fast and then knock one down,” continued Raposa of his jump-off plan. “So, I just kind of let her go her own pace and shaved a couple turns, and it worked. It’s fun because she can spin back on an oxer or a vertical, and you know she’s going to clear it.”

Raposa has had the 11-year-old Belgian Warmblood mare, owned by Century Performance Horses LLC, for three and a half years and has been competing her at the grand prix level for the last two and a half years.

“The first year was a little rocky just getting going; she’s a chestnut mare!” joked Raposa, who has been competing at the Vermont Summer Festival on and off since the show’s inception. “It’s funny; you try to jump in the schooling area, and she doesn’t like other horses or anybody near the jump. She’s hard to actually jump jumps in the schooling area. For the jump-off, I didn’t even jump. I just trotted her around, got her relaxed, and then walked in the ring and went.

“When she’s in the ring, she’s all business,” continued Raposa, who rides the mare in a snaffle bit with a small hackamore over the top. She always wants to jump well. Always.”

In recognition of his victory, Raposa was presented with a crystal trophy, as well as a show scrim from Mona’s Monograms. The weekly Grand Prix Groom Award, including a monogrammed jacket and coolerette from sponsor Glenn Geary of Horsewatch, was awarded to Bryn Stromberg for her work in preparing Iliona for competition.

Finishing in a close second behind Raposa and Iliona were David Jennings of Franklin, TN, and Aventador, owned by Maffitt Lake Farms, with a time of 41.11 seconds. Ireland’s Kevin Mealiff claimed the next two spots in the rankings, taking third with a time of 41.53 seconds riding Nuca 2, owned by Maarten Huygens, and fourth with a time of 41.79 seconds aboard Eldorado, owned by McLain Ward. Rounding out the top five with one rail down in the jump-off was Todd Minikus of Loxahatchee, FL, aboard Amex, owned by Bit by Bit Group.

Competition at the 2019 Vermont Summer Festival continues through Sunday, August 11. Admission is $10 for adults and $5 for children with 100 percent of all gate proceeds benefiting Dorset Equine Rescue, The Dorset School, and Manchester Community Library.