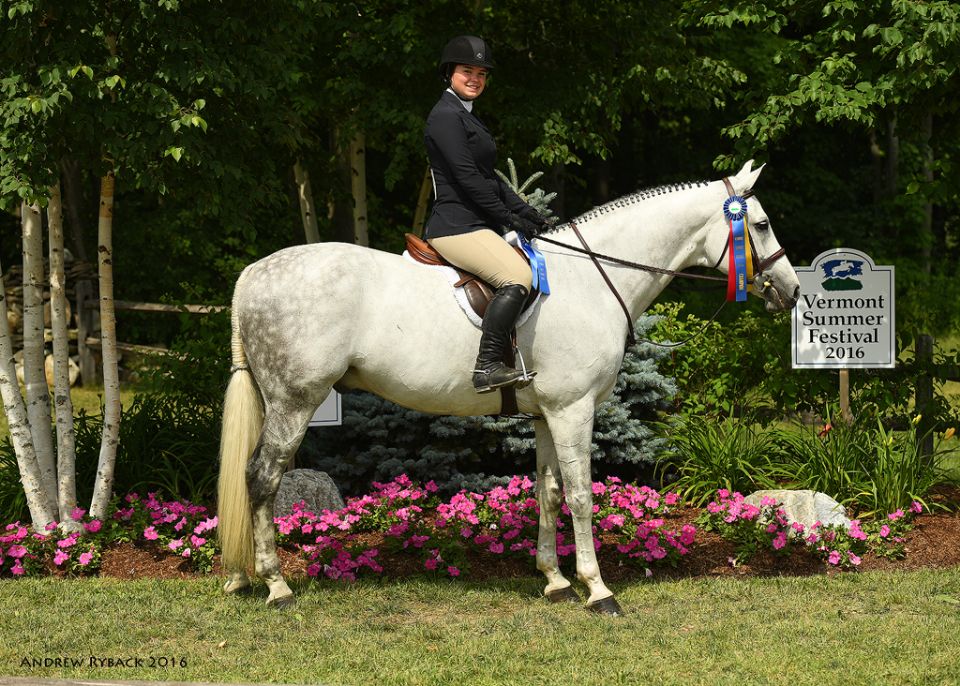 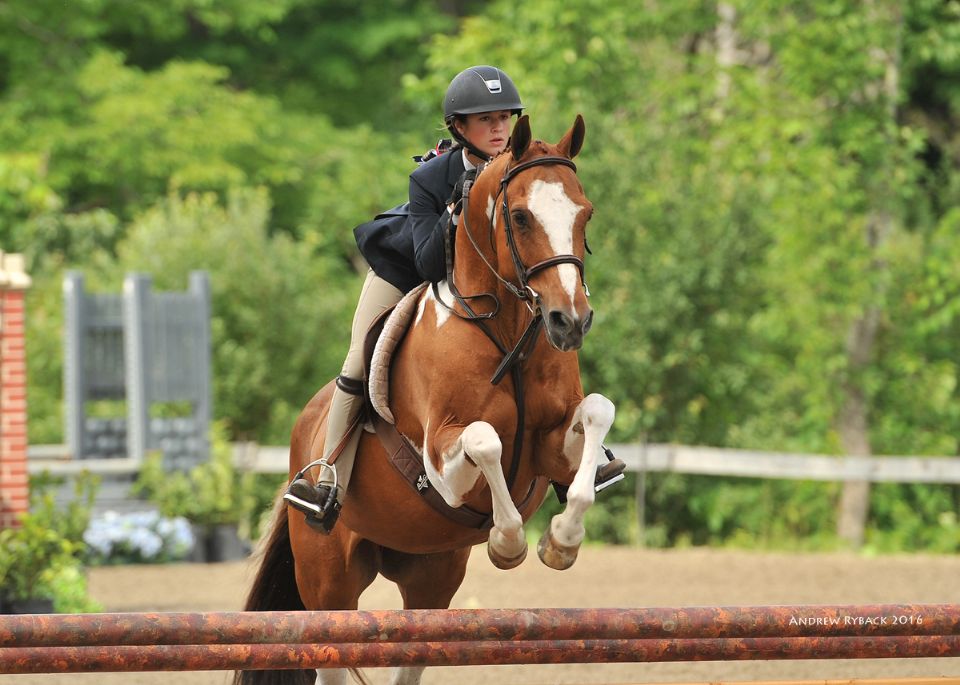 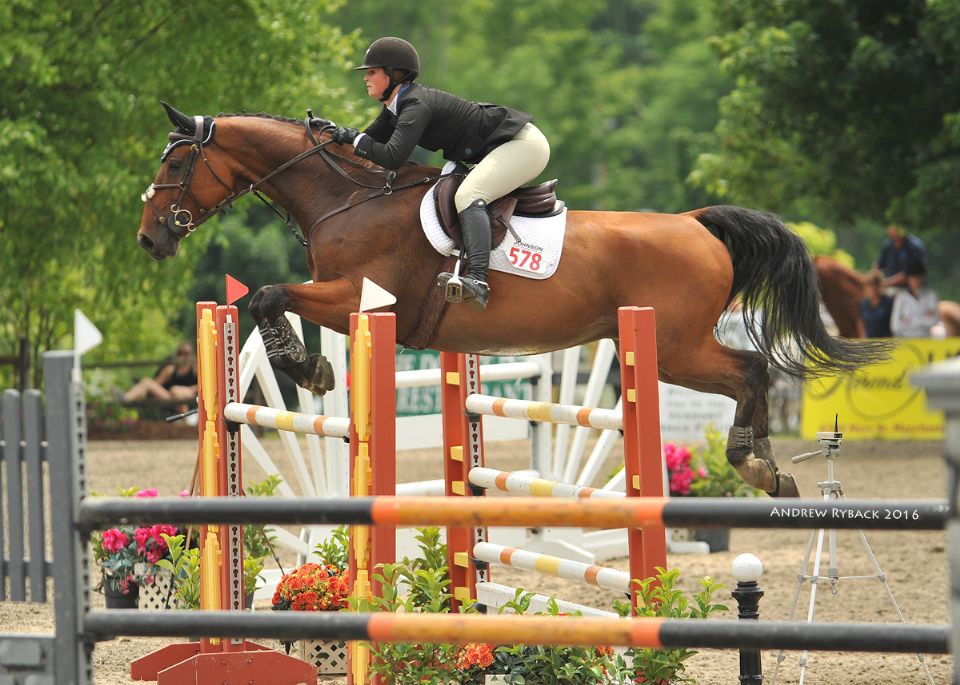 Country Lane Farm, operated by Fred and Christina Schauder, kicked off their summer show season with two weeks of competition at the 2016 Vermont Summer Festival, which runs from July 5 through August 14 at Harold Beebe Farm in East Dorset, VT.

Country Lane Farm is based out of Greenwich, CT, and has a 30-year history developing riders of all levels and disciplines. Attracted by the show's family-oriented atmosphere, the Schauders settle at the Vermont Summer Festival each summer with their three daughters, Emma, Lindsay, and Avery, as well as a barn full of talented young riders.

“From the management to the people working the in-gates to the staff in the horse show office, the entire organization is so welcoming and accommodating,” said Christina Schauder. “They genuinely care that each and every rider, trainer, owner, and groom is enjoying their time at this show.”

With 13 tri-color ribbons hanging in the entrance to their stalls, Country Lane Farm's two weeks in Vermont produced widespread success.

“I am so proud of the entire Country Lane Farm team,” said Fred Schauder. “We have a really great group of riders who always perform well in Vermont, and this year exceeded our expectations.”

Country Lane Farm rider Julia Howe and her mount Kamea Kai got their barn off to an impressive start by winning the first blue ribbon of the circuit in the Schooling Hunter Division before finishing as champions in both the Schooling Hunter and Novice Equitation Divisions. The following week, Howe moved up to the Children’s Hunter Horse Division, ribboned over fences, and won the hack.

Zoe Cass was named Best Child Rider on a Horse riding Quidditch and placed second in the $500 M&S Children’s Hunter Classic. The following week, Cass was champion of the Limit Equitation Division.

Lauren Collins only showed one week but made it count, contributing her share of ribbons with a reserve championship in the Schooling Hunter Division and reserve champion of the Modified Children’s Hunter division aboard Zensation. Abby Kay and The Crowd Goes Wild were third twice in the Modified hunter Division, but had the most fun winning a blue in their .65m Jumper class.

Maddie Hart and Tadafanory were in the spotlight, winning the 11 & Under Equitation flat class before jumping to a top-three finish in both the Maiden Equitation and the .65m Jumper division. Emma Pratt, competing in Short Stirrup for the first time ever, won first place over fences aboard Glenmore Cloud Nine, owned by Country Lane Farm.

Elizabeth Asprinio and Italia collected two second-place ribbons and two thirds in their respective 2'6” Hunter Division before winning the New England Restricted Hunter hack class. In addition, Ariana Swei and Varos were second and third in the Low Hunters Over Fences division. This pair was also sixth in both Children's Hunter Classics during week one.

Having grown up at the Vermont Summer Festival, ‘Team Schauder’ made their parents proud with a spectacular two weeks of competition.

Emma Schauder and Sesto Senso placed fifth in the $10,000 High Junior/Amateur-Owner Jumper Classic during week two to highlight jumper action, while Lindsay Schauder and Cassandro IV were champions the first week and reserve champions the following week in the 3’3” Junior Hunter Division. They were also second both weeks in the $1,000 3’3” Junior Working Hunter Classic before being named Best Junior Rider on a Horse.

The youngest of the Schauder sisters, Avery, was champion of the Pre-Children’s Hunter Division aboard Brownland’s Happy Times and won the 11 & Under Equitation Over Fences class. She was reserve champion of the Restricted Hunter Division riding Great Expectations and also catch-rode Jaime Richard’s pony, Royal Heir, to reserve champion in the Small/Medium Children’s Pony Division.

“The Vermont Summer Festival is more than a horse show, it's an experience,” said Christina Schauder. “Our family and students often spend the entire day at the show, but when we do have a chance to get away, we enjoy swimming in the quarry, going to the exhibitor parties – especially the one at Bromley [Mountain] – shopping, and eating at all the great restaurants with friends.”

One big family, Country Lane Farm is already looking forward to returning to southern Vermont in 2017.